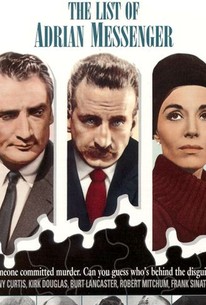 This kaleidoscopic murder mystery begins when Messinger (John Merivale) visits his friend Gethrin (George C. Scott). Messinger gives the retire air force colonel a list of twelve names and asks Gethrin to find the people on the list. Gethrin is alarmed when Messinger's plane blows up immediately following their visit. After looking into the list, he discovers the names all have something in uncommonly in common. All were British prisoners of war in Burma during World War II, and all but one of the men have died under mysterious circumstances. The trail leads Gethin to a sprawling country estate after it is discovered the killer is a master of disguise who was an enemy spy with the prisoners in Burma. The killer's next target is the young boy who is slated to inherit millions of dollars from his uncle, the next victim on The List Of Adrian Messinger. The still unknown killer sets a trap for the young boy as Gethrin tried to stop the murderer before it's too late. John Huston directs this film and make a cameo appearance. Frank Sinatra, Tony Curtis, Burt Lancaster, Robert Mitchum, and Kirk Douglas also have cameo roles and are nearly thoroughly disguised by the expert make-up magic of Bud Westmore.

Clive Brook
as Marquis of Gleneyre

Joe Lynch
as Cyclist
View All

An even more damaging miscue is the utilization of stars who are hidden behind facial disguises in fundamentally inconsequential roles.

Saddled with an incredibly creaky whodunit plot, this thriller should really have been set in Victorian times to accommodate its villain with a passion for disguises, its Holmesian detective in a bowler hat, its murder in a fog-bound Limehouse.

A 'smaller' film from John Huston still serves to give lessons in planning, execution and narration, and 'The List of Adrian Messenger' is no exception. [Full Review in Spanish]

If one takes the film straight, it's hard to believe that the man who made The Maltese Falcon also set this turkey waddling.

A captivating murder mystery, and although the viewer finds out fairly early on who the killer is, the mystery of his motive and the suspense of his capture are sufficient to keep one glued to the screen.

A thoroughly enjoyable murder mystery in the classic style.

There are no featured audience reviews yet. Click the link below to see what others say about The List of Adrian Messenger!