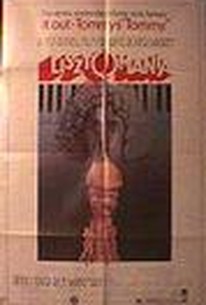 This audacious, vulgar, freewheeling fantasia on the life of pianist Franz Liszt ranks among director Ken Russell's most outrageous efforts. Roger Daltrey, lead singer for The Who, is awkward yet likeable as the flamboyant piano performer with a bevy of fetching mistresses and groupies, while Paul Nicholas is completely outlandish as the scheming opera composer Richard Wagner. There's no nod to reality here: Liszt and Wagner were in fact friends, and Liszt, who became Wagner's father-in-law, actually assisted in the production of Wagner's opulent productions. Russell, on the other hand, presents Wagner as Liszt's jealous rival ready to wreak havoc on the world by unleashing a cryogenic Viking (Yes keyboardist Rick Wakeman) and a horde of machine-gun wielding robot Nazis. In a finale out of Flash Gordon serials, Liszt saves the day after surviving a guillotine designed for phallic dismemberment. The film is fast and loud and wildly undisciplined, much like one of Liszt's Hungarian Rhapsodies. Look fast and you'll see Ringo Starr as the pope. ~ Les Stone, Rovi

It's a berserk exercise of demented genius, and on that level (I want to make my praise explicit) it functions and sometimes even works. Most people will probably despise it.

I await the day when Russell forgets about drawing crowds, and settles down to serious visualizations of the serious music that has meant so much to his life and career.

Ken Russell's latest pyrotechnical heresy, Lisztomania, is upon us, a mad, fantastic joy ride that will outrage some, dazzle others, and leave no one bored.

Lisztomania is a total mess, but it's a mess with Ken Russell's typical grandiosity and oddness of vision.

Like in every carnival, once we fix our sight in its reality, everything becomes distorted and crumbles, revealing the poor dimension of a film that will not matter much in Ken Russell's career. [Full Review in Spanish]

While it may lack narrative sense, this is, without a doubt, one of the most unpredictable and hypnotic viewing experiences you could ever hope to have.

This is Ken Russell unfiltered -- straight-up and unafraid to go wherever his mind leads him. Absolutely unique.

It's not for those who find Russell's zany antics a bit much.

Franz Listz, a huge 19th century celebrity because of his hit version of "Chopsticks," beds a succession of mistresses until the Pope orders him to travel to Germany and exorcise a demon from rival composer Richard Wagner. It's the biography of Franz Liszt if it were directed by Benny Hill working from a script by Federico Fellini; its silly and phallic, and lots of fun if you can surrender yourself to it.

Franz Liszt(Roger Daltrey) performs at a sold out show, almost entirely composed of screaming teenaged girls. The only exception is Richard Wagner(Paul Nicholas), a promising young composer, whose work Liszt makes fun of before Wagner slinks off into the darkness. Fame is not all fun and games as Liszt is commanded to perform for Tsar Nicholas, taking him away again from his paramour Marie(Fiona Lewis) who gave up everything to be with him. At least, his daughter Cosima(Veronica Quilligan) makes him a doll which should comfort him until he makes a detour to visit Princess Carolyn(Sara Kestelman). With baroque, anachronistic and stylistic energy and imagery that includes an additional debt to classic and silent films, Ken Russell is less interested in the facts of Franz Liszt's life, assuming the audience is already familiar with his story and music(all I know is from the film "Impromptu" which featured Julian Sands as the Hungarian composer), than with creating a personal and psycho-political film that tries with a good deal of success to show what the inside of an artist's head looks like. Of course, not everything we see in there is pretty, as Liszt lives constantly in fear of being castrated and/or trapped. That's nothing compared to Richard Wagner who Russell sees as the root of all evil, i.e. Nazism. While I admire the effort to show the Nazis not occuring in a political vacuum, their causes probably went beyond just one classical composer.

If this had less singing sequences and more crazy Wagner-vampire-frankenstein sequences i would rate this even better. Neverless, good ol Ken Russell knows how to make a good bio pic. You will be missed sir.