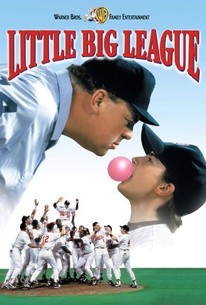 A 12-year old boy inherits the Minnesota Twins in this baseball comedy that is aimed toward younger viewers. Young Billy, a normal twelve-year old, is nuts about baseball and knows almost everything there is to know about the game. He should, his grandfather owns the perennial losers, the Minnesota Twins. When grandpa dies, he leaves the Twins in Billy's hands. Naturally the players are skeptical, especially after Billy designates himself as team manager. But with a combination of guile, knowledge and determination, Billy earns their grudging respect and the team begins a winning streak. Initially, Billy reminds the team that baseball is supposed to be fun, but he soon forgets that as he becomes increasingly involved in the adult world of competition, management and team politics. His three friends are angered that he no-longer has time for them. Billy gets mad when the first baseman starts going out with his mom. Eventually the burned out Billy must again learn how to be a kid. ~ Sandra Brennan, Rovi

It's one of those rare baseball movies that has a real feel for the game, instead of using it as a backdrop for bizarre characters.

Filled with baseball lore, trivia, and cameos by major-league players, this fable covers its bases with sincerity and humor.

Scheinman finds the spirit of the picture, playing up a remarkable situation with some down-to-earth writing and an enjoyable supporting cast.

As the fortunes of the Twins improve to put them in hot contention for the pennant, Little Big League gains a certain excitement. In setting out its personal stories, however, the screenplay and direction offer strictly minor-league material.

Forgettable in every way. The kids-in-big-leagues theme is thankfully dead for now.

Another useless addition to a jam-packed genre

The first third or so of Little Big League is warm and winning - and has some big laughs. But as it progresses, the drama becomes more sentimental and stagnant, and the film begins to drag.

This is good, hilarious and clever family baseball movie since The Sandlot. There were plenty of funny scenes that adults, rather than children, could relate to. It was well done and well acted.

Man I just erased my review for this movie, it was a good one too. Talking about how this movie focuses on the technical side of baseball rather than making a spoof cheesy film like Rookie of the Year, which is still enjoyable. Hollywood loved baseball movies in the early to mid nineties. This movie was the least popular because it relied on the analysis of the game, and most people nowadays don't like baseball. I liked this movie more because it took a smart serious take on sports movies.

This movie had a lot of funny parts in it, and made for a classic-baseball family film. The actors were fairly well, and you cant beat Griffey being in it. But really it carried out way too long, and could of been written better. It's still worth watching for a mid 90s movie though.