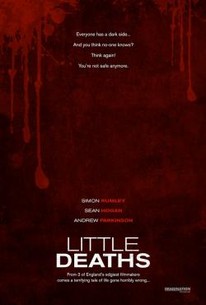 Three bizarre tales of terror and eroticism are brought together in this thriller anthology. In House and Home, Richard (Luke de Lacey) and Victoria (Siubhan Harrison) are a couple whose marriage has gone sour, and the rare pleasure they derive from being together comes from a strange ritual they perform with unknowing and unwilling guests. However, when Richard invites a young homeless woman in for a meal and some spiritual counseling, he and Victoria find themselves in for far more than they expected. Mutant Tool stars Jodie Jameson as Jennifer, a former junkie and prostitute who is trying to stay off the streets with the help of her boyfriend Frank (Daniel Brocklebank). A doctor has prescribed Jennifer a special medication to help her deal with withdrawal, but the side effects seem almost worse than going cold turkey, and in time she learns the bizarre nature of the drug and how it's produced. And finally, Bitch concerns Pete (Tom Sawyer) and Claire (Kate Braithwaite), a couple whose relationship is defined by extreme S&M role-playing. Claire is the dominant partner and Pete is a willing bottom, but he's beginning to grow weary of Claire's treatment, and one night he turns the tables with startling results. Little Deaths was an official selection at the 2011 South by Southwest Film Festival. ~ Mark Deming, Rovi

Semen is the glue that binds the three shorts in Little Deaths.

a tripartite compendium whose very title (a metonymic phrase for orgasm and post-coital tristesse) promises a transgressive admixture of sex and death that the three films certainly go on to deliver.

Little Deaths successfully embraces the world of taboos fearlessly- with sex and death being topics which have both mortified and intrigued audiences endlessly throughout the years.

four-square and alt-horror fans alike will find much to like in these three stories as they offer more substantive fare even within the parameters of the film's vignette format.

Certainly not a random horror film, this anthology film consists of 3 different tales of the two important horror movie elements that goes hand in hand: Sex & Death. I really like all the different colours used in all three tales, also the score was great!! House and Home is quite interesting, revenge is best served with friends, never underestimate the capability of people; the shots were used symbolically that reinforced the theme. The second tale is slow paced and by far the dullest, bad acting with no artistic intention, it was not that great so SKIP The last tale is my favourite, sex is well presented here along with the mental state of masochist. The shots were beautifully used, the contrast of light and darkness was great; the lighting was especially good to show the fear of the BITCH (which is a pun)