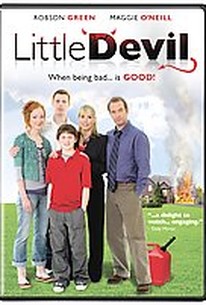 A ten year old boy decides that if being a little angel can't save his parent's crumbling marriage he should perhaps try the opposite approach in darkly comic family drama from director David Richards (Alibi). Young Ollie may have only been walking this earth for a decade, but he's smart enough to realize that his folks are heading for divorce. Try as they might to shield their son from the ugly truth, mom and dad can't cover up the fact that their relationship is failing and they're about to go their separate ways. Ollie hopes that by being a good little boy he can somehow keep his parents together, but as hard as the well-meaning youngster tries he always seems to screw up. When the simmering tensions between Ollie's parents erupt into a violent boil, the frustrated boy decides that the only way to restore the peace is to become a household hellion the likes of which mom and dad have never seen. ~ Jason Buchanan, Rovi

There are no critic reviews yet for Little Devil. Keep checking Rotten Tomatoes for updates!

There are no featured reviews for Little Devil at this time.