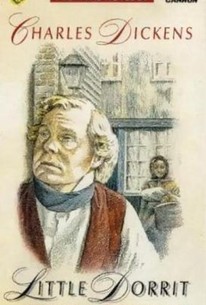 The second of two parts, the first being "Nobody's Fault," this is a production of Charles Dickens' most popular novel. One of those unfortunate movies that people say you will "either hate or love," the main deficit in this case seems to be an inadequate screenplay. The first part involves an ineffectual young man whose life is changed when he meets a young girl living in debtor's prison with her father. This is a low-budget film that tends toward slow motion when this second part uses up the first half of the movie simply reviewing the first part. For those who have already seen the first part, this scene by scene recreation is tedious at best. Still, the story itself is a faithful depiction of the plight of man's suffering and the triumph of human compassion.

Alan Bennett
as The Bishop

Michael Mears
as Clerk with the Quill

Harry Cross
as Little Dorrit as a Child

Joanna Maude
as Wife of Seller of Secondhand Furniture

Howard Goorney
as Bob, the Turnkey

Marjorie Somerville
as Lady by Snuggery

Edward Jewesbury
as Magnate from the Lords

Jonathan Cecil
as Magnate from the Bench

Trevor Ray
as Magnate from the City

John Tordoff
as Waiter in the Coffee House

Christopher Hancock
as Customer in the Coffee House

Peter Waddington
as Boy at Theater

Danny Schiller
as Reveller in the Slap Bang

Elizabeth Archer
as Lady in Concert

Carol Street
as Woman at Dance

Sandra O'Rourke
as Fanny as a Child

Fiona MacAlpine
as Dancer in Theatre

Amanda Maxwell
as Dancer in Theatre

Diana Paris
as Dancer in Theatre

Shona Morris
as Dancer in Theatre

Nadine Large
as Lady in Concert

Joanna Hurley
as Fanny as a Child

Cazz Scattergood
as Dancer in Theatre

Arthur Kelly
as Reveller in the Slap Bang

Sam Steer
as John Chivery at Ages 4 and 8

Rebecca Ham
as Dancer in Theatre

Cate Fowler
as Woman at Dance

Jackie Ekers
as Dancer in Theatre

Sarrina Caruthers
as Little Dorrit as a Child
View All

There are no critic reviews yet for Little Dorrit (Nobody's Fault) (Little Dorrit's Story). Keep checking Rotten Tomatoes for updates!

Not terribly captivating despite the stellar lineup. I think I have little patience for Dickens translations. I blame reading Bleak House and feeling ill afterwards.

Dickensian England is being described as a manipulative conversion of buffoons and upper class crooks and that adaptation is no exception to Charles' spirit.Edzard keeps a low profile and with the ever-mighty Guinness,the precise decoration of 19th century England,notwithstanding the fading background of alleys,moist corners..the book's rich complexity doesn't wither.