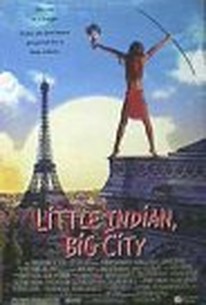 A jungle boy comes to Paris in this French adventure that while primarily aimed towards children, will be equally enjoyable to adult audiences. The film opens with Steph, an international trader, winging to Venezuela to formally divorce his estranged wife Patricia who left him thirteen years ago to live in Lipo-Lipo, a remote outpost deep in the Amazon. While he is there, Steph discovers that Patricia secretly bore him a son, Mimi-Siku. Mimi is truly a child of the jungle, but he longs to see the Eiffel Tower. He returns to Paris with his father. Upon arrival, Steph is dismayed to discover that his partner Richard has fumbled a major soybean deal and that both of their jobs are on the line. While Richard and Steph are frantically trying to sell their excess beans which includes suspicious interactions with the Russian Mafia, Mimi-Siku, dressed in his loincloth and carrying his bow and arrow, explores his new home. Pandemonium ensues as the boy climbs the Eiffel Tower, begins shooting and eating aquarium fish, and accidently terrifying people with his pet tarantula. ~ Sandra Brennan, Rovi

Carlos Reyes
as Mailman in the Amazon

Gaston Dolle
as Benjamin
View All

If you, under any circumstances, see Little Indian, Big City, I will never let you read one of my reviews again.

The French idea of a 'family film' is a bit kinkier than what we're accustomed to.

There are no featured audience reviews yet. Click the link below to see what others say about Un Indien dans la Ville (An Indian in the City) (Little Indian, Big City)!