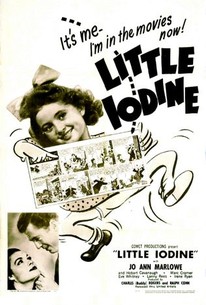 Running a mere 56 minutes, Little Iodine was the first of five "streamliners" produced by Comet Productions, a company formed by Mary Pickford, her husband Charles "Buddy" Rogers, and former Columbia exec Ralph Cohn. Based on the comic strip by Jimmy Hatlo, the film stars Jo Ann Marlowe as Iodine, the bratty daughter of Henry and Cora Tremble (Hobart Cavanaugh, Irene Ryan). The story gets under way when Iodine mistakenly believes that Mrs. Tremble is romantically involved with French professor Simkins (Leon Belasco). Iodine's misbegotten efforts to break up the nonexistent affair causes friction between her father and his bombastic boss Mr. Bigdome (Emory Parnell), but the little darling comes to the rescue at fadeout time. Thanks to legal entanglements, Little Iodine has never been released to television, but that's no great loss. ~ Hal Erickson, Rovi

[Little Iodine] works in considerable chuckles in dealing with escapades of the pen-and-ink title character, and generally serves up salable film.

The story is quite thin, being more or less a collection of situations that have proved laughable in similar comedies, but for those who are entertained easily it offers some laughs.

Reginald Le Borg's direction points up slapstick of the straight comic-strip variety which should be accorded a good reception by the kiddies, especially, but which, in spots, may strain adult patience.

Some of the dialogue which Richard Landau's screenplay puts into the mouths of his juvenile characters is far-fetched, to say the least.

The youngest children handle their roles effectively, and the direction by Reginald LeBorg is creditable.

There are no featured reviews for Little Iodine at this time.