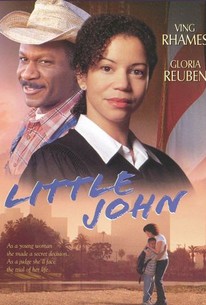 This Hallmark Hall of Fame presentation stars a heavily (and effectively) "aged" Ving Rhames as taciturn Texas rancher John Morgan. Long estranged from his daughter Natalie (Gloria Reuben), John is determined to effect a reconciliation. To this end, he embarks upon a long journey to Los Angeles, taking along his grandson Little John (Robert Bailey Jr.), whom Natalie, an unwed mother, had given up for adoption twelve years earlier. But Natalie, who through an ironic twist of fate has become a family-court judge, wants absolutely nothing to do with either her father or her son -- and her reasons are not quite as callous or cold-blooded as one might imagine. Boasting a distinguished African American cast (with Patty Duke as virtually the sole Caucasian actor), Little John was telecast by CBS on May 5, 2002.

There are no critic reviews yet for Little John. Keep checking Rotten Tomatoes for updates!

The ending was surprising! It was very well done and worth seeing.