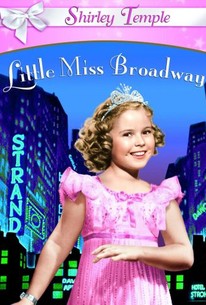 Child star Shirley Temple was getting a bit long in the tooth (at age 10!) by the time she made Little Miss Broadway. Facing the possibility that Temple's appeal was beginning to slip, the producers overstocked the film with top musical-comedy performers and character actors. The curly-topped actress is cast as orphan girl Betsy Brown, discharged in the care of her uncle Pop Shea (Edward Ellis), the manager of a theatrical boarding house. Before long, Betsy is the darling of the clientele, including bandleader Jimmy Clayton (Jimmy Durante), animal trainer Ole (El Brendel), and a pair of wisecracking midget entertainers (George and Olive Brasno). Snooty Sarah Wendling (Edna Mae Oliver), owner of the hotel building, is fed up with "show people" and demands that they pay their back rent or move out post-haste. But Sarah's nephew Roger (George Murphy), in love with Pop Shea's daughter Barbara (Phyllis Brooks), comes to the aid of the hotel's occupants. With the help of Betsy and her friends, Roger pleads his case in the courtroom of judge Claude Gillingwater by staging a lavish musical revue. The specacle of George Murphy dancing with Shirley Temple will prove particularly amusing to those aware of both stars' future political careers. Songs include "Be Optimistic", "If All the World Were Paper", "Hop Skip and Jump" and the title tune. Incidentally, outtakes of Little Miss Broadway exist showing Shirley Temple doing a frighteningly accurate impersonation of her costar Jimmy Durante (ha-cha-cha-cha-cha!)

Edna May Oliver
as Sarah Wendling

Eddie Collins
as Member of the Band

Syd Saylor
as Member of the Band

Jerry Colonna
as Member of the Band

Brian Sisters
as Themselves

Heinie Conklin
as Members of the Band

George & Olive Brasno
as Themselves
View All

In other words, Little Miss Broadway is the sort of picture that no Temple fan would dream of missing, and that old meanies who don't care for Shirley wouldn't be dragged to with a court summons.

Not a great Shirley movie, but it was okay.