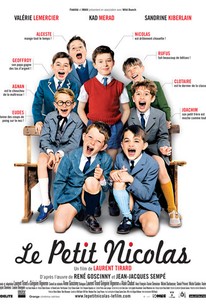 This dark, slightly absurdist comedy from France topped the French box office in 2009, becoming a local phenomenon. It is narrated by Nicolas (Maxime Godart), an eight-year-old boy supremely happy with his loving, doting parents and a colorful group of friends. It seems that life couldn't possibly improve - until Nicolas eavesdrops on his folks and surmises that his mother is pregnant. Horrified, he envisions a scenario where a new baby brother arrives and crowds him out of the house, leaving his parents with no time to care for him. Nicolas and his friends then cook up a series of wild schemes to dispose of the baby. ~ Nathan Southern, Rovi

Michel Galabru
as The Minister

Sandrine Kiberlain
as The Teacher

It presents a gently humorous, beautifully shot idyllic version of childhood, all blue skies, good manners and not a hair out of place. It's a nice place to visit for the duration.

Meek French family entertainment, based on a series of children's books by René Goscinny, original writer of the Asterix strips.

He's charming and adorable to parents, yes - but you've got to wonder if kids will find this mummy's boy a bit wimpy.

A likable, sentimental, occasionally saccharine celebration of middle-class France and its likable children in the late 1950s and early 60s ...

A breezy, undemanding adaptation of the bestselling novels that broke box-office records in France in 2009.

While eight-year-olds on up with love the scrapes and triumphs that the kids get themselves into, there is also a lot of pleasure to be had from an adult's perspective.

click to read the full review at Movies for the Masses

Highly recommend Nowadays kids movie follow the same pattern, some how involving a secret pop star, or "The Rock", I had to search all the way, and find a french movie that surprised me, it showed me that this generation still has hope, but this time in french This might be one of the best french films ever, the simple story, one eyed comedy keeps the story fluctuating. Little stories interconnect with each other, the story of a couple who hope to have a promotion by inviting the boss for dinner, and the story of their kid, Nicolas and his imagination, together with his gang, in total making this an amazing film highly developed characters, an amazing script and cinematography, makes this one of the best french films, and children busters out, so don't keep taking your kid to watch "the Rock" being a tooth fairy, or take him to see some Disney Musical, make him a cult kid and take him to see, french films. Clotaire: A date?

This was an adorable movie! So, some things were a teensy bit over the top, but the premise was very cute and led to some funny moments. In fact, the laugh out loud factor was nearly embarrassing on the plane flight. :S

Fun to watch! A family film that does not insult the intelligence of adults. The kids are all brilliant and they play their parts perfectly.