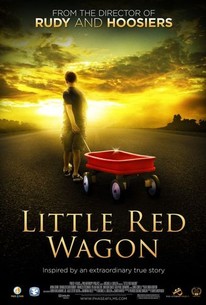 An 8-year-old boy dedicates his life to helping children rendered homeless by Hurricane Charley, and learns that you can't put a price tag on life's greatest gifts in this inspirational drama based on actual events. Dejected at the images of families whose lives were uprooted by the disaster, Zach Bonner uses his trusty wagon to collect essential items that will help them get back on their feet. When the media spotlight's Zach's benevolent endeavors, the selfless seizes the opportunity to launch his own charity, dubbed the Little Red Wagon Foundation. Later, Zach encounters a widow and her son who were rendered homeless by the story, and vows to draw attention to their plight by embarking on a cross country walk. Despite his mother's trepidations about the journey and his teenage sister's growing resentment over being stuck at the center of a media circus, Zach sets out on a journey that will transform not just his own life, but also the lives of everyone he encounters. ~ Jason Buchanan, Rovi

There's weighty material waiting to be processed here, but in "Little Red Wagon" it doesn't have a home.

Even the cheesiest inspirational flicks have to be populated with characters who have something at stake. Conflict is the heart of good storytelling, and "Little Red Wagon" is conflict-free to the point of catatonia.

The filmmakers never sentimentalize their story and the performances are first-rate. What could be cloying is played out honestly... and not just its good intentions.

Fits perfectly within the filmography of Indiana born David Anspaugh.

Inspiring story of a boy's efforts to help homeless kids.

A double whammy about the crusade of a big-hearted boy who helps homeless children and a depiction of the plunge of a mother and her son into poverty.

Well-intentioned, but a little heavy-handed and manipulative.

The melodramatic storyline and moralizing tone are overbearing, and only O'Connor's performance rises above the level of a Hallmark Channel rerun.

Not many 14-year-olds have movies made about their lives. Zach Bonner is an exception, always has been, and that's why Little Red Wagon is such a sweetly inspiring story.... It's a nice movie, probably too much so for viewers seeking meatier drama.

Poorly executed heartwarming beats aside, Little Red Wagon does an excellent job of showing how a charity grows and functions.

There are no featured audience reviews yet. Click the link below to see what others say about Little Red Wagon!