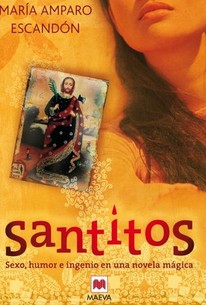 Santitos is a character-driven comedy about a young Mexican woman who has to come to terms with the loss of her teenage daughter. Esperanza's daughter Blanca suddenly and mysteriously dies in the hospital where she was having her tonsils removed. Shortly afterward, the vision of a saint appears on the greasy glass door of the oven, telling Esperanza that Blanca is not dead. Despite warnings from her best friend and the local priest, she embarks on an incredible journey across the country and over the border that helps her shed her inhibitions one by one. Out comes a different Esperanza, a liberated independent woman who is also sexually uninhibited. Santitos was screened as part of the Filmmakers of the Present section of the 1999 Locarno International Film Festival.

A charming, thoroughly beguiling comedy fantasy in which the supernatural and the most mundane coexist in quirky harmony.

A loopy tale about a superstitious widow's quest to find her 12-year-old daughter.

A phantasmagorical Mexican drama that focuses on the strange ways God speaks to us in surprizes.

There are no featured audience reviews yet. Click the link below to see what others say about Little Saints (Santitos)!