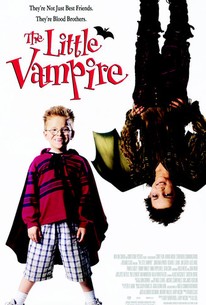 Critics Consensus: The Little Vampire can't seem to find the right pitch, with its muddled, jumpy script and badly executed mix of cuteness and fright.

Critics Consensus: The Little Vampire can't seem to find the right pitch, with its muddled, jumpy script and badly executed mix of cuteness and fright.

Critic Consensus: The Little Vampire can't seem to find the right pitch, with its muddled, jumpy script and badly executed mix of cuteness and fright.

It is not easy being a 9 year old in a new country. Tony has just moved with his parents, Dottie and Bob Thompson, from a big bustling city in America to a small village in a remote corner of Scotland. Every night, in his new home, Tony has nightmares about vampires, and he has no idea why. He soon becomes so absorbed by them that he starts studying every book he can find on the subject. His classmates tease him about his vampire obsession, especially the cruel local kids, Nigel and Flint, nephews of local squire, and Bob's employer, Lord McAshton. The teacher at his new school is so shocked he tells Tony's Mom about how worried he is; not a good start for the new kid in town. One evening, while in his room, practicing basic vampire moves, Tony gets a visit from a large bat, which transforms before his eyes into a 9 year old vampire boy, Rudolph, who happens to be extremely hungry, and convinced that Tony is one of his kind. Realizing that Tony is not a vampire, Rudolph tries to fly away again, but having no strength he just plummets straight to the ground outside Tony's window. Rookery the vampire hunter in his vampire hunting truck is in hot pursuit, and Tony, intrigued by the real life vampire he has met, protects Rudolph and, at his request, leads him to the local farm, where Rudolph drinks the blood of a cow. What later ensues is an adventurous caper during which Tony helps Rudolph find the mysterious missing half of the amulet that can help Rudolph and his family finally realize their dream - to become human again!

Critic Reviews for The Little Vampire

Dark movie may frighten some kids.

Vampire cows provide comic relief and many of the scares in this respectfully dark yet optimistic story about a lonely child who befriends a vampire.

Much of the film's success is down to the costume design, the novel SFX and the mildly foreboding atmosphere of the mist enshrouded Scottish countryside.

For adults, the film will drag in spots, but it's filled with all those values you hope to instill in your children.

Very funny in a way reminiscent of Babe: Pig in the City.

The Little Vampire is hardly a children's classic, and it will doubtlessly be more at home after it hits the video shelves.

It's an occupational hazard that you actually have to try to think about movies like this, which just get weirder and weirder the more you consider them.

Lipnicki has learned how to make cute faces, but his delivery is formulaic and without emotion.

Excellent stuff -- it won't just be kids that love this film!

A sprightly romp, funny, full of life lessons, and scary.

Rich Cline
Shadows on the Wall
View All Critic Reviews (66)

Audience Reviews for The Little Vampire

It was really funny, and charming, pretty scary for kids. it was a light, enjoyable romp..but didnt offer much more tha that for any others.

It was one of my favourite movies when I was about 7 years old! Now it's still pretty good, but definately worth watching!

The costumes are gorgeous, and in a way it is pleasingly different to see a film where humans are more likely to be harmed by the vampire hunter than the vampires themselves. However, even for a children's film the dialogue is pretty awful, and the acting is just about bearable (the child actors tend to stretch this the most, but they are children after all, so I suppose we should forgive them). Overall, it's a children's film which an adult will likely be able to tolerate watching with them. Whether or not the adult will actually like it depends on the adult.