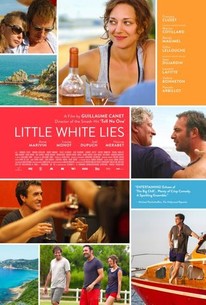 Critics Consensus: Little White Lies luxuriates in the company of its impressive cast and small-scale dilemmas to its detriment, yielding a comedy of initial charm that meanders into boredom.

Critics Consensus: Little White Lies luxuriates in the company of its impressive cast and small-scale dilemmas to its detriment, yielding a comedy of initial charm that meanders into boredom.

Critic Consensus: Little White Lies luxuriates in the company of its impressive cast and small-scale dilemmas to its detriment, yielding a comedy of initial charm that meanders into boredom.

French box-office sensation Little White Lies is a sparkling comedic drama from Guillaume Canet, the writer-director of the worldwide smash hit Tell No One. Bringing together the top names from France's current generation of actors, including Jean Dujardin, Marion Cotillard and Francois Cluzet, Canet weaves a joyous and heartfelt film out of the dilemmas of eight thirty- and forty-something close friends. With its nostalgic soundtrack of classic hit songs from Creedence Clearwater Revival, Janis Joplin, Nina Simone and others, Little White Lies is a contemporary spin on The Big Chill, a generational statement on youthful frivolity giving way to middle-aged pleasures and sorrows, with a finely observant eye on modern day relationships. -- (C) Official Site

Matthieu Chédid
as Raphaël
View All

Little White Lies is less a portrait of the poignance and beauty of lasting, mostly platonic relationships than a lesson in how to be a shitty friend.

"Little White Lies" is a bit too long, but has plenty of Gallic charm.

A sprawling, initially engaging French comedy-drama that became a hit in France but ultimately underwhelms.

The overall tone of "Little White Lies" feels off, or maybe it just doesn't translate to American audiences.

As the movie wears on ... the melodrama amps up to a final scene capable of draining any remaining pathos.

It is a film of emotional comings and goings, disappointments, silences and relapses. [Full Review in Spanish]

The real power in Canet's Little White Lies is its group of familiar, loveable and likeable characters who all could be someone we would love to know and befriend.

Guillaume Canet's great mistake is in having the gall to craft a moral about the seeming pettiness and emotional blindness of this bunch of vacationing, bourgeois Parisiens.

When a string of American oldies turns the movie into a two and a half hour version of The Big Chill, any harder emotions are thrown out for easy nostalgia.

A pleasurable and, at times, compelling experience.

Manages to capture the feelings of an entire generation and the double standards of the French upper class. [Full review in Spanish]

With a first-rate cast and a great soundtrack, this is a warm and funny movie that already begins with an impressive long take, and although it has a maudlin conclusion that almost ruins it, it is centered on a group of characters who are flawed and entirely human - like they should be.

While one of their members is ailing, a group of friends proceeds with their yearly vacation. This film is a modern French version of The Big Chill. One can even draw one-to-one comparisons between the characters: Francois Cluzet's character = Kevin Kline's character, Jean Dujardin's character = Kevin Costner's character, Marion Cotillard's character = a combination of Meg Tilly's and Mary Kay Place's characters. It even has many of the same songs. It's okay to imitate, especially when a film is imitating one of the best, and The Big Chill is a superior film. But there are two important aspects of comparison that I consider relevant to evaluating Little White Lies. First, The Big Chill's characters could be reduced to types, but by the end of the film, the individual qualities of these character cause them to rise above the cliche type: the philosophical justifications behind Jeff Goldblum's character make him more interesting than the horny guy type. The same is true with Little White Lies; the scene outside Lea's apartment in Paris makes Gilles Lillouche's character more interesting than his horny guy type. This is where the French version succeeds, but The Big Chill, in addition to being an interesting film in itself, it's also a cultural critique, capturing the ennui and disappointment and failures of the Baby Boomer generation. It may be that Little White Lies makes a similar cultural critique for French audiences, but it doesn't translate, and including the sixties nostalgia songs that graced The Big Chill only serves to muddy the film's message. Overall, this is a strong film with excellent performances and esprit de corps, but the film's larger context makes it less than its idols.

Some of the best character development I've ever seen. Also, this is the first movie that ever made me cry in theatres. I pretty much loved it and decided to overcome its flaws, which actually allow the viewer to omit them only if they have a heart. Cause this movie is going straight for yours.

"Call yourselves friends? You buy into each other's lies." Every year, Max, a successful restaurant owner, and Véro, his eco-friendly wife invite a merry group of friends to their beautiful beach house to celebrate Antoine's birthday and kick-start the vacation. But, this year, before they all leave Paris, their buddy Ludo is hurt in a serious accident, which sets off a dramatic chain of reactions and emotional responses.

REVIEW
This is our old friend the catalyst plot in which a stranger insinuates himself into a community, group, and causes mayhem until by the end the screen is littered with skeletons emerging from closets. Guillaume Canet has added spin to this trite plot by having the catalyst not coming into the group but leaving it. In short a long established group of friends spend a month each year on vacation as the guest of Max, a self-made successful businessman. On the eve of this years vacation one of the group, Jean Dujardin, is involved in a horrific road accident that eventually proves terminal. The friends opt to go on vacation anyway on the grounds that they are impotent so far as practical help goes. This decision, natch, unleashes all sorts of revelations, home truths, violence etc. Canet is a highly accomplished writer director and whilst this entry lacks the thrills and tension of Tell No One - which was adapted from a best selling novel rather than an Original screenplay as here - he still draws outstanding performances from the entire ensemble. Catch it if you can.