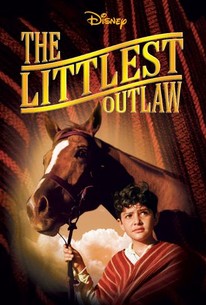 Filmed in Mexico, The Littlest Outlaw was produced for Walt Disney Studios by Larry Lansburgh, who'd previous turned out several of the best Disney live-action short subjects. The hero is ten-year-old Pablito (Andres Velasquez), the stepson of a mean-spirited horse trainer. Unable to abide the cruelties inflicted by his stepfather on a prize jumping horse, Pablito "liberates" the animal and runs away from home. Along the way, the boy and horse make the acquaintance of a kindly priest (Joseph Calleia). Worried that the padre will turn him over to the authorities, Pablito runs off again, and this time is separated from the horse. A band of gypsies capture the animal and sell him to a bullfight arena, where the horse is used to lure the bulls out of the pen. Pablito and the priest manage to rescue the horse and return it to its rightful owner, a powerful Mexican general (Pedro Armendariz). Fortunately, the general is a good-hearted soul, and it is he who paves the way for the film's happy ending. Moderately successful at the box-office, The Littlest Outlaw soon became a mainstay of Disney's many TV anthology series.

Pepe Ortiz
as Himself

Pedrito Vargas
as Groom
View All

Critic Reviews for The Littlest Outlaw

Along with the vast appeal evoked by a winsome boy and a condemned animal on the run, Walt Disney's The Littlest Outlaw is enhanced by its excellent camera record of Mexican scenics and moires.

Boy and horse move staunchly through the action, doing what seems to come naturally, and Joseph Calleia offers a warmly likable, sometimes humorous performance as the friendly padre.

Joseph Calleia appears as the padre in whose church the lad takes refuge with his horse, and whose antics with his old automobile provide a good share of chuckles.

Director Roberto Gavaldon takes this basic situation and weaves skillful action, centering his story on Andres Velasquez, whose performance has seldom been equaled by a child thesp in point of appeal.

Disney has combined in this Mexican-made movie something of his People and Places series with a story that should have special appeal for children.

Children and horses and colorful scenery are offered in this Walt Disney film, and they're all very well, but a story of stouter proportions is badly needed.

There is a good deal of the charm of a fairy story about the picture and also some superb riding sequences.

Director Gavaldon has managed to linger over a picture here and there that doesn't do much to advance the action, too, without noticably damaging his picture's pace. This is a good trick if you can do it and Mr. Gavaldon obviously can.

While following the adventures of his little outlaw Director Roberto Gavaldon makes the most of his Mexican location. Natural beauty is enhanced by colorful festival scenes and a fascinating religious service.

This is an affecting little tale of a Mexican boy's love for an Army horse that has been condemned to die. Here, too, the Technicolor is superb.

Walt Disney has fashioned a simple but heartwarming story of a boy and his horse in this live-action feature, a pictorially beautiful production.

Audience Reviews for The Littlest Outlaw

There are no featured audience reviews yet. Click the link below to see what others say about The Littlest Outlaw!