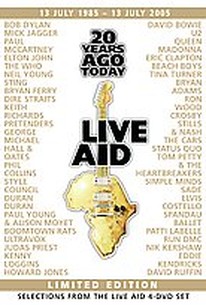 In the winter of 1984, musician Bob Geldof saw a television documentary on famine in Ethiopia and decided that someone needed to do something to help. Looking to himself, Geldof soon persuaded a handful of British pop stars to record a benefit single, "Do They Know It's Christmas," to raise money for famine relief and awareness about the issue involved. The single was a smash, and led to similar records released worldwide, including USA for Africa's "We Are the World." But Geldof's master stroke came on July 13, 1985, with Live Aid, a pair of massive benefit concerts (one in London, one in Philadelphia) broadcast around the world (an estimated 1.5 billion saw the shows) that raised 140 million dollars for the world's hungry. 20 Years Ago Today: The Story of Live Aid is a documentary which looks at how this remarkable event came together, as well as featuring performances from such stars as Paul McCartney, U2, Bob Dylan, Madonna, Elton John, Eric Clapton, David Bowie, The Who, and more. ~ Mark Deming, Rovi

There are no critic reviews yet for Live Aid - 20 Years Ago Today - The Story of Live Aid. Keep checking Rotten Tomatoes for updates!

There are no featured reviews for Live Aid - 20 Years Ago Today - The Story of Live Aid at this time.