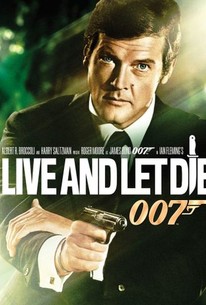 Critics Consensus: While not one of the highest-rated Bond films, Live and Let Die finds Roger Moore adding his stamp to the series with flashes of style and an improved sense of humor.

Critics Consensus: While not one of the highest-rated Bond films, Live and Let Die finds Roger Moore adding his stamp to the series with flashes of style and an improved sense of humor.

Critic Consensus: While not one of the highest-rated Bond films, Live and Let Die finds Roger Moore adding his stamp to the series with flashes of style and an improved sense of humor.

Roger Moore makes his first appearance as "Bond...James Bond" in 1973's Live and Let Die. Bond is dispatched to the States to stem the activities of Mr. Big (Yaphet Kotto), who plans to take over the Western Hemisphere by converting everyone into heroin addicts. The woman in the case is Solitaire (Jane Seymour in her movie debut), an enigmatic interpreter of tarot cards. The obligatory destructive-chase sequence occurs at the film's midpoint, with Bond being chased in a motorboat by Mr. Big's henchmen, slashing his way through the marshlands and smashing up a wedding party. Clifton James makes the first of several Bond appearances as redneck sheriff Pepper, while Geoffrey Holder is an enthusiastic secondary villain. The title song, written by Paul McCartney and Linda McCartney, provides the frosting on this 007 confection.

B.J. Arnau
as Singer
View All

Will James Bond live on in the 1970s? Not much farther, if this episode is anything to go by.

It is good, lively, mindless entertainment, slow to warm up but once embarked upon its improbable story quick to appreciate its own absurdity.

Guy Hamilton's direction lacks enthusiasm and pace, while even the art direction -- long the Bond films' real secret weapon -- seems to have fallen to a shrunken budget.

It can't quite muster an explosive third act to match previous jaunts, but Moore had got his feet under the table.

The comic book plot meanders through a series of hardware production numbers.

Setting aside an allright speedboat spectacular over land and water, the film is both perfunctory and predictable -- leaving the mind free to wander into the question of its overall taste. Or lack of it.

This introduces the worst -- I repeat, worst -- character to be found in any Bond movie.

Live and Let Die's flaws are apparent, but it's still a solid adventure, and Moore fits smoothly into the role of Bond. It's an enjoyable film, and that's really all you could ask for.

Considering the blandness of this eighth theatrical chapter, it's miraculous that further adventures would make it to the big screen.

If Live and Let Die was Moore's acid test, then he passed the test.

While [Bond's] latest adventure looks as though his producers had trimmed a few million dollars off the budget, it is still fast, funny and frivolous enough to satisfy.

Stands as proof to the maxim that James Bond and the 1970s simply didn't mix.

Roger Moore does a very good job in his first outing as James Bond, immediately implementing his expert-level of sly wit that would eventually sculpt 007 into a comedy action hero for the 70's. When it comes to this one and the next (The Man with the Golden Gun), Moore is very much the singular best aspect about them. While certainly a step-above the disappointing "Diamonds are Forever," I don't tend to go back to Moore's first two outings that often. Aside from the fantastic Paul McCartney theme song, Moore, a solid group of villains, and a decent boat chase, this particular entry is pretty average for the most part. The light horror elements sure add a unique flavor but the blaxploitation elements severely date the movie. Also, I really hate Sheriff J.W. Pepper and it boggles my mind that he also appears in the next Bond film. Was this Dukes of Hazards reject really THAT popular!?!

I fell in love with this bond entry right from the start. Roger Moore kicks it up a notch in this new take on the James Bond character, making his this over-the-top action star, with a lot of wit. The action spread throughout this film is fantastic, especially a very memorable chase in the river, but by the end of the film, you just can't help but wonder why they took so much time on the action, before getting back to a forgotten storyline. Also, there are some very odd ritual scenes in which I wondered why they included, but still, I had a terrific time during my viewing of this film and the direction and editing has gotten much much better. "Live and Let Die" is a fine entry to the bond canon.

'Live and Let Die' does not provide much value other than showcasing Moore as his first outing as Bond, all devilish winks and suave tongue-in-cheek as he tries to take down a heroin plant in New Orleans.