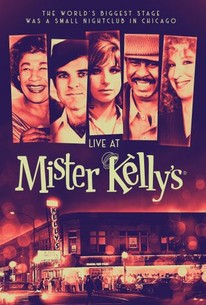 The iconic Mister Kelly's, once called a "supernova in the local and national night life firmament," illuminated legendary Chicago's Rush Street, and the entire country, by launching talent like Barbra Streisand, Richard Pryor, Bob Newhart, Bette Midler and Steve Martin. Its visionary owners George and Oscar Marienthal smashed color and gender barriers to put unknown, controversial voices on stage and transform entertainment, as America knew it in the '50s, '60s, and '70s. Now, with the club long gone, and its star talent reaching its golden years, George's son David and director/screenwriter, Theodore Bogosian, go on a quest to collect the memories of the clubs before they are lost. Celebrity interviews now include Bob Newhart, the Smothers Brothers, Dick Gregory, Lainie Kazan, Herbie Hancock, Dick Cavett, Tim Reid, Fred Willard and Ramsey Lewis. The film portrays through interviews, live footage, photos, music, and song, the most beloved and famous talent of our time at the decisive moments when they showed up, dug deep, and broke in. How do you change the world with a laugh and a song? Find out in a film that documents the rise and fall of one of American entertainment's great proving grounds.

Joe Alterman
as Self

Sarah Berman
as Self

Bill Boggs
as Self

Kitty Bruce
as Self

Richard Cahan
as Self

Dick Cavett
as Self

Tom Dreesen
as Self

Elliott Gorn
as Self

Arny Granat
as Self

Shecky Green
as Self

Dick Gregory
as Self

With his film, Bogosian remembers a springboard venue in the evolution of the uniquely American artforms of jazz and comedy.

Even though the film is ultimately not much more than an exercise in nostalgia, that's hardly a bad thing when you're delving into a past as rich as the one on display here.

This insightful documentary looks back at the Rush Street hotspot that hosted Barbra Streisand, Richard Pryor, Bette Midler and countless other rising stars.

It's important for people to never forget the history, including myself, and although the Chicago of the past is long gone, it's nice to relive it in the documentary Live at Mister Kelly's.

Audiences who remember or are curious about a time when nightclubs were a staple of the entertainment industry will revel in Live at Mister Kelly's.

If you're a fan of vintage nightclub entertainment-especially jazz and stand-up comedians-Live From Mister Kelly's is worth a peek.

If you have any interest in the history of Chicago and popular entertainment in the 20th century, it is a must while others should enjoy it as both a celebration of a rich period of our cultural past.

There are no featured reviews for Live at Mister Kelly's at this time.