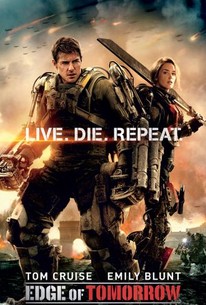 Critics Consensus: Gripping, well-acted, funny, and clever, Edge of Tomorrow offers entertaining proof that Tom Cruise is still more than capable of shouldering the weight of a blockbuster action thriller.

Critics Consensus: Gripping, well-acted, funny, and clever, Edge of Tomorrow offers entertaining proof that Tom Cruise is still more than capable of shouldering the weight of a blockbuster action thriller.

Critic Consensus: Gripping, well-acted, funny, and clever, Edge of Tomorrow offers entertaining proof that Tom Cruise is still more than capable of shouldering the weight of a blockbuster action thriller.

The epic action of "Edge of Tomorrow" unfolds in a near future in which an alien race has hit the Earth in an unrelenting assault, unbeatable by any military unit in the world. Major William Cage (Tom Cruise) is an officer who has never seen a day of combat when he is unceremoniously dropped into what amounts to a suicide mission. Killed within minutes, Cage now finds himself inexplicably thrown into a time loop-forcing him to live out the same brutal combat over and over, fighting and dying again...and again. But with each battle, Cage becomes able to engage the adversaries with increasing skill, alongside Special Forces warrior Rita Vrataski (Emily Blunt). And, as Cage and Rita take the fight to the aliens, each repeated encounter gets them one step closer to defeating the enemy.(C) Warner Bros

David Kaye
as Voice of UDF Commercial
View All

[Edge of Tomorrow] may not be as smart as it could've been in the broad strokes, but a clever, well-acted thrill ride like this doesn't really need to have its head fully in the game, now does it?

Credit a smart script, smarter direction, excellent production elements and an unflappable leading man for taking you to hell and back -- over and over again.

Edge of Tomorrow is the perfect mix of blustering action and sci-fi thinky nonsense that is best enjoyed without picking at it too much.

This is one of my favorite movies of the year so far.

This is the kind of thoughtfully constructed movie that other summertime blockbusters should aspire to be more like, clever and cool and never giving you that ho-hum sense that you've seen it all before.

It's the rare summer spectacle that, tacked-on coda notwithstanding, might actually warrant repeat viewings.

Death becomes Tom Cruise in Edge of Tomorrow, a gripping and meticulously constructed futuristic thriller that finds his untested soldier fighting aliens while stuck in a time loop.

A fascinating premise with a disappointing visual style.

The Angel of Verdun is an action heroine with the skills needed to ride into battle, but the empathy to reach out to the partner she just met.

The first two reels are packed with energy and invention it's only when the conventions that made the story enticing are put aside in the last reel that the movie becomes a standard Cruise action flick.

Unexpectedly clever surprises keep the anticipation and mystification rolling, while the action sequences are plentiful and intense.

Mike Massie
Gone With The Twins
View All Critic Reviews (328)

It may not be exactly original, but this effective and expertly-edited sci-fi movie does a great job combining aliens and a Groundhog Day plot with top-notch visual effects and a fantastic sound design, while Tom Cruise sells his character's evolution with a typical magnetic performance.

Doug Limon steers a pretty good script (think what if Groundhog Day married Starship Troopers) with exciting visuals and dynamic storytelling skills to make this one a hella summer thrill ride from start to finish. Insectoid alien hordes want terra firma for their own yet again ... and this time they can't lose cause they've got a secret weapon. Only they - and we, too - failed to consider the surprising charisma between Tom Cruise and Emily Blunt that enlivens this sci- fi love-in way past expectations and then some. Me likey.

Adequate as this type of junk goes.

Groundhogs Day should be proud to have had such a gritty reboot.