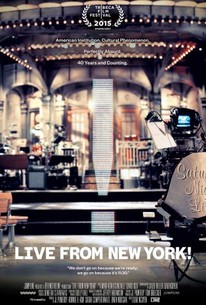 Critics Consensus: Light on detail and insight, Live from New York! offers little that SNL fans haven't seen in any of the show's various retrospective specials.

Critics Consensus: Light on detail and insight, Live from New York! offers little that SNL fans haven't seen in any of the show's various retrospective specials.

Critic Consensus: Light on detail and insight, Live from New York! offers little that SNL fans haven't seen in any of the show's various retrospective specials.

Saturday Night Live has been reflecting and influencing the American Story for 40 years. Live From New York! explores the show's early years, an experiment from a young Lorne Michaels and his cast of unknowns, and follows its evolution into a comedy institution. The film looks at SNL as a living time capsule, encompassing decades of American politics, media, tragedy, and popular culture with an irreverent edge. Archival footage is interwoven with stolen moments and exclusive commentary from SNL legends, journalists, hosts, musical guests, crew and others influenced by the comedy giant. Live From New York! captures what has enabled SNL to continually refresh itself over nearly 800 episodes and keep America laughing for 40 years.

It isn't just a rehash of the same old stories and clips. It's a stylish and entertaining examination of why it's still on the air, 40 years on - and why we're still talking about it.

It's refreshing to see a retrospective of the show that's not bogged down by overly detailed timelines and the desire to wax nostalgic.

Nguyen does fine work illustrating how SNL went from the ultimate outsider show to the ultimate institution, stopping along the way to touch briefly on controversies .

As infomercials go, the doc is funnier than a Sham-Wow! spot, but it's still an infomercial.

If you simply love the show, and want a movie about how it has reflected - and, rarely, helped change - attitudes about sex, gender and race, then "Live From New York!" may fit the bill.

It's too cursory, too frivolous to make a case for the show's importance as an American institution, even though it insists on it.

Still crazy after all these years.

Anti-establishment hepcats like Bill O'Reilly and Al Gore attest to the show's enduring satirical relevance, while every hard-hitting question about institutionalized racism and sexism comes with a readymade apologia and a perfectly cherry-picked clip.

Nguyen's film does deserve credit for not only not shying away from its subject's darker moments, but addressing them head-on in the first act.

Unfortunately lacking deep insight into the Saturday Night Live dynasty, [this] plays as a series of mini-documentaries that might come packaged with a best-of DVD.

Greater effort should have been spent examining the film's emerging ideas relating to racism, sexism, political involvement and changing public perspectives then using them as a basis for the film itself.

There are no featured audience reviews yet. Click the link below to see what others say about Live From New York!!