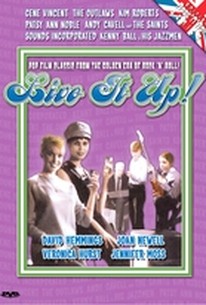 A handful of teenage rock and rollers are looking for their big break and they need it fast in this British pop-musical, which offers a look at the U.K. rock music scene in the days before the Beatles took it international. Dave Martin (David Hemmings) and his pals Phil (John Pike), Ron (Heinz Burt), and Ricky (Stephen Marriot) work as delivery boys for the post office during the day, but in their spare time they're members of a beat group called the Smart Alecks who are looking to get ahead. Dave's mother Margaret (Joan Newell) is supportive of Dave's interest in music, but his father Herbert (Ed Deveraux) thinks his son is wasting his time and money, especially after the band blows its savings cutting a demo tape of their best original song, "Live It Up." Herbert gives Dave one month to get his foot in the door of the music business, or else he'll force him to go look for a real job. Dave is sure the tape will score the Smart Alecks a record deal, especially after an accident at a movie studio while he's on a delivery puts his name in the papers, but as fate would have it, Dave misplaces the tape. As the Smart Alecks look for a new way to get the attention of a music biz bigwig, Jill (Jennifer Moss), Dave's girlfriend, thinks she might be able to use her job as a taxi dispatcher to help. Originally released in the United Kingdom as Live It Up, Sing and Swing features a brief appearance by first generation rock icon Gene Vincent, who sings the song "Temptation Baby" in a television studio, while legendarily eccentric producer Joe Meek coordinated the movie's musical score. Future Deep Purple and Rainbow guitarist Ritchie Blackmore can be spotted sitting in with the group the Outlaws, while Stephen Marriot would soon shorten his first name to Stevie and become a pop star as a member of the Small Faces. ~ Mark Deming, Rovi

Andy Cavell And The Saints

Critic Reviews for Live It Up! (Sing and Swing)

There are no critic reviews yet for Live It Up! (Sing and Swing). Keep checking Rotten Tomatoes for updates!

There are no featured reviews for Live It Up! (Sing and Swing) at this time.

Live It Up! (Sing and Swing) Quotes