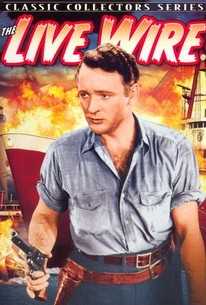 Little more than stock footage from the 1934 serial Pirate Treasure, this low-budget action adventure stars stunt man Richard Talmadge as Dick Nelson, a sailor leading an expedition to an uncharted island where a treasure is supposed to be stored. En route, the vessel suffers a mutiny and eventually explodes, leaving two groups of survivors washed up on shore. Dick's group, which also includes the captain (Charles K. French) and his daughter (Alberta Vaughn), is the first to encounter the treasure but is almost defeated by an opposing faction led by nasty Bull Dennis (George Walsh). Although a Regal Pictures Corp. production, Live Wire was filmed at Universal using standing sets.

There are no critic reviews yet for Live Wire. Keep checking Rotten Tomatoes for updates!

There are no featured reviews for Live Wire at this time.