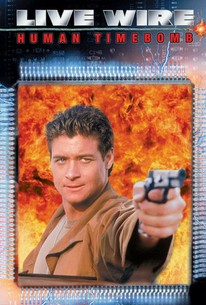 The U.S. government faces its most deadly adversary ever when top FBI agent Jim Parker (Bryan Genesse) is abducted by a nefarious Cuban general and implanted with a stolen military computer chip that turns him into a deadly terrorist in this explosive thriller from action specialist Mark Roper. It's a race against time as Agent Parker struggles to regain his free will and take down the rouge general, but does man have the power to overcome machine when it's sending orders from beneath his skin? Whether or not he can overcome the power of this experimental microchip, the stage is set for an explosive climax that could bring nations to their knees and ignite a war in which the line between man and machine becomes increasingly blurred.

Kryska Wilkowska
as Juanita
View All

There are no critic reviews yet for Live Wire: Human Time Bomb. Keep checking Rotten Tomatoes for updates!

There are no featured reviews for Live Wire: Human Time Bomb at this time.