The Lives of a Bengal Lancer1935 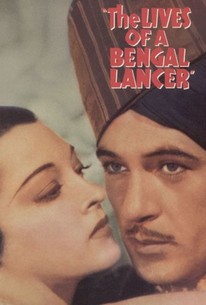 The Lives of a Bengal Lancer Photos

Gary Cooper stars in this rousing adventure saga of three British officers of the 41st Regiment of Bengal Lancers of India. The story begins as Lt. McGregor (Gary Cooper) accepts two new officers to his company -- the brash Lt. Fortesque (Franchot Tone) and Lt. Stone (Richard Cromwell), the son of the garrison's commander, Col. Stone (Guy Standing). In an effort not to show favoritism, Stone's father barely acknowledges his son during a parade of the new officers. Lt. Stone resents this treatment by his father and becomes embittered at both his dad and the British army. McGregor is ordered to search for a British spy, Lt. Barrett (Colin Tapley), who has infiltrated the army of crazed chieftain Mohammed Khan (Douglas Dumbrille). The three officers find Barrett, who tells them Khan is planning an uprising against the British, utilizing the mountain tribes for a massive assault. Lt. Stone finds himself captured by the rebels and is taken to Mohammed Khan's mountain fortress to be tortured. Stone's father refuses to send in the lancers to save his son, reasoning that his son was captured to lure the British forces to their doom. Disguising themselves as Indian peddlers, McGregror and Fortesque go off to rescue Stone. But they are soon discovered and taken to Mohammed Khan's lair to be tortured, with Khan telling McGregor, "We have ways of making men talk." Mohammed wants the soldiers to tell him where a shipment of ammunition will be delivered. McGregor and Fortesque withstand the torture without divulging the location, but Lt. Stone cracks and tells Khan what he wants to know. The three officers see the ammunition delivered to Khan's fortress, but then they hear Col. Stone and 300 lancers have arrived outside of Khan's gates.

Rollo Lloyd
as The Ghazi, a Prisoner

Lya Lys
as Girl on Train
View All

Critic Reviews for The Lives of a Bengal Lancer

A rousing adventure yarn laced with generous dollops of humor.

Franchot Tone and Gary Cooper give better performances in this picture than in any in which they have appeared before.

One of the most exciting action-adventures of the 1930s (perhaps of all time), catapulting Gary Cooper to major stardom.

A rousing adventure story in the Kiplingesque fashion.

Pretty good, but it should have been great.

The Lives of a Bengal Lancer (1935) is a sweeping, escapist adventure tale of three British officers of the 41st Regiment of the Bengal Lancers, stationed in northwest India. The Paramount Pictures film was loosely adapted...

Audience Reviews for The Lives of a Bengal Lancer

Another tale of the heroic white guy in the midst of terrifying dark people. Not terribly great without the wooden Gary Cooper, pretty terrible with the block of wood.

The Lives of a Bengal Lancer Quotes