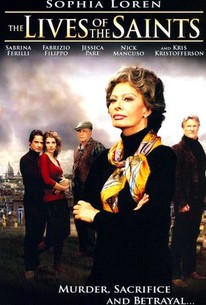 Lives of the Saints Photos

A young boy's innocence is shattered when his mother enters into an elicit affair with a mysterious blue-eyed stranger in a two-part, four hour miniseries directed by Jerry Ciccoritti and starring Academy Award-winner Sophia Loren. Vittorio Innocente is a typical young boy from the tiny Italian village of Valle del Sole. When Vittorio's youthful innocence is shattered by his mother's enigmatic boyfriend, the youngster is compelled to shed light on the mystery of his mother's past by piecing together her remarkable story one chapter at a time. As he does so, Vittorio gradually learns of the centuries-old superstitions that continue to influence the actions of the naïve villagers, and gains greater insight than ever into the true nature of humanity. Though the hypocrisy, fears, and maliciousness he discovers in the centuries-old village soon leads Vittorio to discover the truth about his mother, those very same discoveries also threaten to unravel the very foundation of his safely sheltered world.

Michael A. Miranda
as Alfredo Innocente

Critic Reviews for Lives of the Saints

The moral of this well-shot but grossly uneven film is obviously that, once you get what you want, you may well find either that you don't want it, or that devastating complications can ensue.

"Muddled" is the polite word, balderdash the preferred one.

The direction from Rankin and Chris Cottam is very uncertain; there is lots and lots of shouty acting and a cringeworthy denouement worthy of Viz comic's legendary cockney villain Big Vern.

A bizarre brew of Brit-grit, magic realism and religious allegory.

dares, from the unlikely vantage of Britain's criminal underworld, to look heavenwards - and, in its darkly pessimistic way, to see nothing there.

As painfully hypnotic as watching a religious zealot ranting in the street and carrying a banner proclaiming the second coming.

Comes across as an obscure Renaissance play which has been badly modernised.

Not every turn in the story is well judged, but what's more damaging is that the film's general aura is not sufficiently powerful.

Thanks to some sluggish pacing, sketchily drawn characterisations (notably Marc Warren's doubting priest) and a predictable, gun-toting finale, though, it ends up as far less than you might have hoped for.

There are no featured reviews for Lives of the Saints at this time.

Lives of the Saints Quotes