The Living and the Dead2007 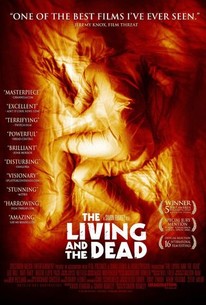 The Living and the Dead Photos

News & Interviews for The Living and the Dead

Critical Consensus: Life Has Its Ups And Downs, Darjeeling Is Transporting

View All The Living and the Dead News

Critic Reviews for The Living and the Dead

The Living and the Dead is not an easy movie to sit through, and its darkness may be a little mannered, but it's an elegant construction with real emotions buried deep inside.

This is a truly haunted movie.

A bizarre psychological study of degeneration and dependency, The Living and the Dead is a horror movie only in the most literal sense.

Part neo-gothic horror, part empathetic schizoid freak-out, The Living and the Dead suggests an unlikely cross between Spider and Requiem for a Dream.

This is great filmmaking in the sense that overplayed virtuoso guitar shredding is great music -- which is to say, not at all.

A striking study of madness that skirts horror territory.

...has elements of horror, as the plethora of knives and hypodermic needles point to, but this is a unique entry for those who like thought-provoking concepts served up with their grue.

A devious and admirably twisted little mind-bender of a genre flick.

The film is filled with the types of mundane, believable horrors that affect an audience in ways no regular horror movie could hope to achieve.

So genuinely horrific and unrelentingly sad and grim, many people will not have the stomach for it.

[F]ans of small horror stories and British indies with a dark side will certainly be entertained, though cross-over appeal to non-horror fans will probably be limited.

Audience Reviews for The Living and the Dead

The Living and the Dead is an annoying psychological thriller. I did like one part though, and that was the setting. The house in the movie really fits the atmosphere of the movie well. Other than that there is nothing I like about it. The character James was way over the top. Constantly screaming, jumping, and running. I guess the filmmaker needed to make him as annoying as possible, in order to offset the extreme dullness of the rest of the movie.

Good story, but I did find it a little hard feeling sympathetic to a couple who don't know better than to let their deranged (not just mentally challenged as many reviews state) son be alone without a keeper for even a second. Before anything happens there are definitely signs he's becoming more dangerous. Anyway, as I said, it's a good story, but except for feeling a certain amount of fear when situations got out of hand, I never really felt too much for any of the characters, which is a shame since it seems to be mainly a character piece.

The Living and the Dead Quotes