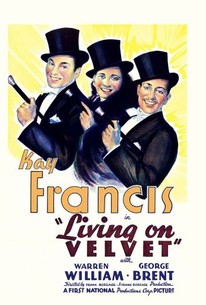 In this drama, an amateur pilot is driven to living life in the fast lane after he pilots that plane that crashed and killed his parents and his sister. He goes on to marry. He and his new wife live in terrible conditions until he suddenly inherits $8,000 which he uses to buy a plane and start up a commuter service. Unfortunately, he finds himself again in debt. His disgusted wife leaves, but when he is hurt in a car crash, she eventually returns. ~ Sandra Brennan, Rovi

May Beatty
as Dowager

Eddie Phillips
as Eddie at Party

Asta the Dog
as Max, the Dachshund Dog
View All

Critic Reviews for Living on Velvet

The picture would be nothing without Miss Francis and it doesn't amount to much with her.

Audience Reviews for Living on Velvet

There are no featured audience reviews yet. Click the link below to see what others say about Living on Velvet!