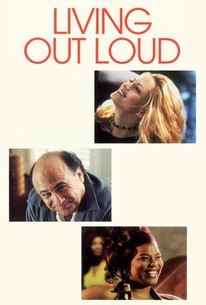 Noted screenwriter Richard LaGravenese made his directorial debut with this dramatic comedy about two unlikely people who find each other while looking for love. Judith Nelson (Holly Hunter) is suddenly single after discovering her husband of fifteen years, a successful doctor (Martin Donovan), has been having an affair with a younger woman. Judith stews, plans, plots and fantasizes, but she can't decide what to do with her life until she goes out to a night club to see singer Liz Bailey (Queen Latifah), who is full of advice on life and love. While out on the town, Judith is suddenly kissed by a total stranger, which opens her eyes to new possibilities ... which is when she notices Pat (Danny De Vito), the elevator operator in her building. Pat's life is in even worse shape than Judith's; his wife has thrown him out for gambling, he's in debt to loan sharks, he's sleeping on the couch of his more successful brother, and his daughter is dying. At first Pat borrows money from Judith, but when the two start talking, they realize they have more in common than they imagined. LaGravenese based his screenplay on a pair of short stories by Anton Chekhov.

Eddie Cibrian
as The Masseur

Elias Koteas
as The Kisser

Deborah Geffner
as Woman with Makeup

Terry Rhoads
as Across Hall Man

Susan Reno
as Across Hall Woman

Sybil Azur
as Confessional Dancer No. 1

Carmit Bachar
as Confessional Dancer No. 2

Monique Chambers
as Confessional Dancer No. 3

Donielle Artese
as Confessional Dancer No. 4

Aisha Dubone
as Confessional Dancer No. 5

Shawnette Heard
as Confessional Dancer No. 6

Tanika Ray
as Confessional Dancer No. 7

Laurie Sposit
as Confessional Dancer No. 8

Adrian Young
as Confessional Dancer No. 9

Willie Garson
as Man in Elevator

Critic Reviews for Living Out Loud

This feminist comedy shot through with fantasies about the travails of newly single womanhood strikes some rich chords, but doesn't quite put together a complete tune.

What I enjoyed in Living Out Loud was the comfort of these lives flowing briefly in the same stream. The sense that the unexpected was free to enter the story, and would not be shouldered aside by the demands of conventional plotting.

'Living Out Loud' presents the delightful surprise of Danny DeVito as a romantic lead. And he also sings!

... made up of magical moments of revelation that are the film's strength as well as its ultimate weakness.

If you live in Manhattan, you know women like Judith (Holly Hunter), the 40-something, Upper East Side divorce who put her ex-husband through medical school.

... there is always a market for these kid of sleek, superficial movies about the redemptive power of being true to your own nature

A wonderful film from beginning to end, one that is honest, genuinely funny, and poignant.

The smooth, soothing soundtrack could not be a better fit for the laid-back, low-key, unforced appeal of the film.

Audience Reviews for Living Out Loud

Mahalo, Joanna, this was a good one. Danny DeVito. Truly underrated. This is worth seeing just because of his performance.

For those flixster friends who have been following my evolving thinking on the term "bittersweet," this is another movie which captures that mood. Neither tragic nor comic, and certainly not classically tragi-comic, there is a wistfulness to this film whiich, for me, can only be called bittersweet. After the horrible life he has had, the most receint blow being the death of his daughter, DeVito is on an upward curve. You know that his life has turned around.

For Hunter, it is a different story. It is easy to believe that, as DeVito departs her life, she may have many more downward trending days ahead. It is sad, but it is so true in life. You make choces at moments that can lead you to the top, or send you rushing toward the abyss.

A beautifully quiet and thoughtful movie.