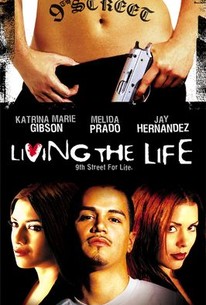 Two girls who grew up in a rough and tumble neighborhood try to find a way out of the cycle of gang violence and crime in this gritty urban drama. Cata (Katrina Marie Gibson) and Ana (Melida Prado) are two young women in their late teens who grew up together in the Latin ghetto of East Los Angeles. Cata and Ana are both gifted dancers, and have gained a name for themselves on the local nightclub circuit, but they're also both members of a neighborhood youth gang, and while they both realize gang life offers no real future, walking away is not as simple as it sounds. Cata, raised in a dysfunctional family, isn't sure what sort of future she might have, but Ana has ambitions of going to college and moving away. However, when her educational plans don't pan out, Ana tries to take another proven tack for escaping the gangs -- having a baby. Based on the acclaimed novel Party Girl by Lynne Ewing, Living the Life was screened at the 2001 Los Angeles Latino Film Festival.

Roger Velasco
as Raul
View All

Critic Reviews for Living the Life

There are no critic reviews yet for Living the Life. Keep checking Rotten Tomatoes for updates!

There are no featured reviews for Living the Life at this time.