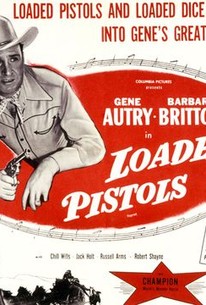 Gene Autry goes in search of the man who killed his friend during a blackout in this action-packed western from Columbia. Someone cuts the lights and kills Ed Norton (Stanley Blystone) during a heated poker game and that someone, according to Sheriff Cramer (Chill Wills), may just be young hothead Larry Evans (Russell Arms). Gene, however, thinks otherwise and arranges for Larry to hide out in a cabin belonging to elderly prospector Jim Hedge (Clem Bevans). But the real killer is doing his best to incriminate Larry and Gene must not only fight the sheriff but also the accused man's pretty sister, Mary (Barbara Britton), in order to uncover the truth behind the killing. Despite a preponderance of action, Autry, backed by the Cass County Boys, manages to perform five songs in Loaded Pistols: "Pretty Mary", "Jimmy Crack Corn", "When the Bloom is on the Sage", "A Boy from Texas, A Girl from Tennessee" and the title tune.

A satisfactory B Western, with singing cowboy Gene Autry in fine voice.

There are no featured audience reviews yet. Click the link below to see what others say about Loaded Pistols!