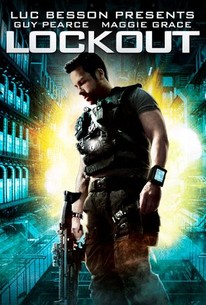 Critic Consensus: Guy Pearce does the best he can with what he's given, but Lockout is ultimately too derivative and shallow to build on the many sci-fi thrillers it borrows from.

Starring Guy Pearce and Maggie Grace and set in the near future, Lockout follows a falsely convicted ex-government agent (Pearce), whose one chance at obtaining freedom lies in the dangerous mission of rescuing the President's daughter (Grace) from rioting convicts at an outer space maximum-security prison. Lockout was directed by Stephen St. Leger and James Mather from their script co-written with Luc Besson, who is also a producer. Peter Stormare co-stars. -- (C) Open Road

Mark Tankersley
as Barnes
View All

This movie is vacuous.

At the screening, in between laughing fits, people around me whispered, in awed tones, "B movie, 1956."

It's laughably over the top but Pearce, a decent actor, anchors it somewhere between Escape From New York and The Transformers.

Shallow, silly yet infectiously good-natured, this is as guiltily pleasurable as dystopia gets.

The space prison set-pieces get the job done; only in the film's terrestrial bookends does this nuts-and-bolts action film show its rust.

It rattles along at an appropriately frantic pace. It's just a shame that so much cheese has been allowed into the recipe.

...no matter how firmly your food taster is nestled into your jowls there are so many things that a film for general consumption is not allowed to do. Lockout does them all.

There's not a lot that can save Lockout from being what it is: 94 minutes of mindless fun.

Lock and load! Don't get locked out of Lockout. And yes....I want my sequel now.

An adrenaline fuelled amalgamation of frantic thrill-per-minute action with the claustrophobic tension of a futuristic thriller.

For a night of shameless entertainment and explosions, Lockout is a winning choice.

Not a great movie, but interesting and fun enough to watch.

A Sci-Fi action thriller so fast you don't even notice how flawed it is. Pearce's one-liners are way too entertaining and the pace way too breathless to notice how many other (and better) films were influencing this. It's not particularly engaging, what with the cartoonish bad guys and somewhat predictable plot, but somehow it's still a lot of fun and over sooner than you can blink, erm....think.

I see this Euro sci-fi-action brought Guy Pearce shifting into action-man mode. Action specialist and co-writer/producer Luc Besson has fashioned another slick thriller - with a twist of sci-fi - to rank alongside this Transporter franchise; while a buff Pearce does his best in a role more suited to Jason Statham. Fans of John Carpenter's Escape from New York will immediately recognise the premise although its safe to say that Snow is no Snake Plissken! Maggie Grace is as good as ever as the damsel in distress and the supporting actors do a bang up job as well. Guess what this is one of three Grace-Besson films including Taken sequels.

Luc Besson penned and produced this actioner that's motto could be "if you liked it in another film we'll do it, too, but more". Which is not bad. Not necessarily. No. Okay, okay, I lied. It gets old once you figure out the plan. So sit back and amuse yourself guessing what film they borrowed what bit from. Nonetheless Guy Pearce is always good (they begin the film with him falling off a many storied building. .. and getting up and walking away, let me know what the believability quotient was going to be for the rest of the film right off the bat). Spoiler alert (like it matters): there are two, count 'em, two black guys in the whole film, grains of pepper in a sea of salt. Guess who the bad guys are? Peter Stormare , one of my favs, phones in his part.