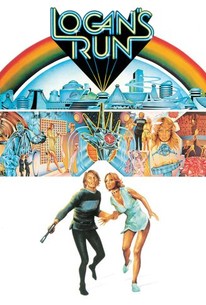 One of the last pre-Star Wars science-fiction extravaganzas (based on a novel by William F. Nolan and George Clayton Johnson) takes the famed '60s maxim about not trusting anyone over thirty one step further. Set in the 23rd century, Logan's Run wakes place in a world of peace and immediate pleasure, where nobody grows old. After the age of 30, people go in for "renewal" -- meaning they are killed (although the government hides this from the population). But in this utopian paradise, some people still want to live past thirty. Known as "runners," these people are unhappy being "renew" and try to flee to a place called "Sanctuary." Secret police, called "sandmen," are employed to hunt down runners for renewal. One particular sandman, Logan Five (Michael York), is assigned to discover the truth behind Sanctuary. To do this, his life-clock is accelerated and he poses as a runner. When he suspects that renewal is more about death than life, he joins up with Jessica 6 (Jenny Agutter), a member of the underground movement, and the two flee the city hoping to find Sanctuary.

Greg Lewis
as Cub
View All

Fundamentally, this is just further proof of Hollywood's untiring ability to reduce all science fiction to its most feeble stereotypes.

Harmless fun enlivened by a couple of sequences that are as good as the entire film should have been.

Logan's Run is a vast, silly extravaganza that delivers a certain amount of fun, once it stops taking itself seriously.

...interesting to hardcore sci-fi fans and cultural historians, Logan's Run is all dressed-up with nowhere to go...

Logan's Run allows the viewer's imagination to run free in a whole new world. And imagination is what science fiction is all about.

Where is Rod Serling's Twilight Zone when we need it most?

It's a good idea. But what the movie required to set it off and make it unusual is style and this, despite a few handsome sets, is sorely lacking In the direction, writing and most of the acting.

Michael Anderson... has insisted in mixing action with spectacle, but misses the mark. The "message" of the film doesn't go beyond its distinguished predecessors. [Full Review in Spanish]

... I found myself reflecting that sf writers can get away with a lot on the printed page that moviemakers just can't.

In the future, what'll we do with senior citizens, the bothersome old crones, this sci-fi jumble posits. And what exactly is the definition of senior, eh? Let's not quibble about this: when do the old farts start to be a bother? While not high art, there is still some fun to be had in this schlocky Flash Gordon-like actioner, if it's only watching Jenny Agutter run around braless for an hour and a half.

I love this sci-fi movie, mostly because I'm a big fan of York's, but it's also one of the best strange psychedelic sci-fi 70s movies because the story is very clear, and very good. I highly recommend seeing this movie before they remake it.

HaHa - I wonder how this one holds up?