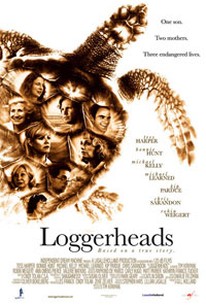 Tim Kirkman wrote and directed Loggerheads, a film that follows three different storylines that all transpire over the course of a Mother's Day weekend, but take place at different times. One of the stories features a man who arrives in a coastal North Carolina town in order to preserve turtles that are endangered. He becomes involved with a local businessman and must decide where he feels in his heart that he belongs. A second story concerns a woman who begins to feel her small-town changing in ways that frighten her. She must face these changing social realities while constantly listening to the speeches of her minister husband. The third storyline involves a woman who intends to spend the weekend celebrating the holiday with her own mother while also attempting to make contact with the child she gave up for adoption years before. Loggerheads was a selection at the 2005 Sundance Film Festival.

J.R. Rodriguez
as Gordy
View All

The dramatic tension is nil. But the performances, particularly by Hunt (in a non-comedic role, for a change), are worth a look.

... an understated and heartfelt story, superbly acted, with a strong sense of people and place.

... if you can shake out some of the chafing bits of sand that weigh down Loggerheads, you'll find a heartfelt story about people coming to terms with irrevocable loss.

Despite a meandering tone, Loggerheads is consistently watchable thanks to committed actors playing recognizable, decent folks just trying to do the right thing -- or rectify mistakes of the past.

This quiet community and family drama set on the North Carolina shore offers a bighearted outlook on how to absorb change and defeat.

Slow, unadorned, compassionate, and earnest, Loggerheads is a low-fi throwback to the independent films of the 1980s and '90s -- heartland miniatures hewn from plainspoken lives.

Loggerheads proceeds at a turtle's pace. At times, you feel like you're sitting in the preacher's house, with its well-starched tablecloth and hymns for all occasions.

"Loggerheads" is like a person who never raises her voice, yet somehow you know to pay attention to every word she says.

The movie could have benefited from a lighter touch ...

The movie weaves flawless performances by Bonnie Hunt, Chris Sarandon, Michael Learned and others into a mesmerizing tapestry of familial yearning and loss.

The film is very smart in recognizing that being gay is about a lot more than whom you sleep with.

A bit sappy but very likeable movie about a woman's search for the child she gave up for adoption.