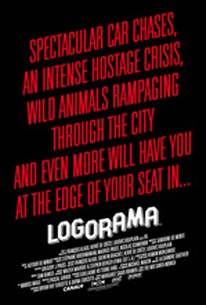 An alternate reality where advertising has taken on a life of its own sets the stage for this satiric animated short subject. Logorama imagines a massive American city where practically everything has been replaced by some sort of corporate symbol -- the buildings are advertising logos, the people are characters from noted television commercials, and even the birds and insects have the familiar look of name-brand trademarks. However, life in this media metropolis takes an ugly turn when a certain well-known fast food mascot finally snaps and goes on a violent crime spree, with the police hot on his heels. Directed by François Alaux, Hervé de Crécy, and Ludovic Houplain, Logorama was one of the most talked-about short films screened at the 2010 Sundance Film Festival, and won the Academy Award for Best Animated Short Subject.

There are no critic reviews yet for Logorama. Keep checking Rotten Tomatoes for updates!

It's 16 minutes long, but is by far the most visually provoking, and witty short film of them all. With loads of action and cuss words to entertain the action junkies, but smartly drawn entertainment for everyone else.

an incredible use of thousands of foods, gasoline companies, and many other logos and it is genieously thought and planned

This French 16 minute film won the 2009 Kodak Prix at Cannes, and the 2010 Best Animated Short Oscar at the Oscars. A cop chase / eco disaster film, it has around 2,500 (2,500!) corporate logos, visual wit, plenty of swearing and Ronald Mc Donald as the villian of the piece. . Here it is on youtube http://www.youtube.com/watch?v=ksmGnlxXL5s