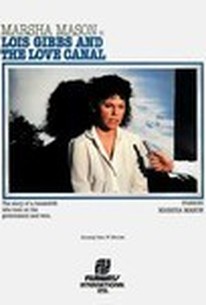 Hardly a person is now alive who does not remember the 1978 ecological disaster at the chemical-waste deposits in Love Canal, New York. This made-for-TV film stars Marsha Mason as housewife Lois Gibbs, who suspects that her children have fallen ill due to leakage of toxic waste at the nearby deposits. The New York State Department of Health closes down the elementary school, but for Lois and nearly 700 of her neighbors, this just isn't enough. Lois begins a loud and aggressive movement to force the United States Government to relocate the residents of Love Canal, and to reimburse them for the loss of their property. Robert Gunton co-stars as Lois' husband, who faces unemployment as the result of his wife's refusal to sit down and be quiet. Written for television by Michael Zagor, Lois Gibbs & the Love Canal had its broadcast premiere on February 17, 1982.

Critic Reviews for Lois Gibbs and the Love Canal

Lois Gibbs and The Love Canal tells the true story of a shy but principled middle-class housewife whose zeal becomes a force for justice.

There are no featured reviews for Lois Gibbs and the Love Canal at this time.