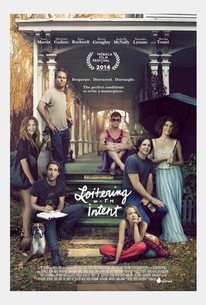 When out-of-work-actors Raphael (Ivan Martin) and Dominic (Michael Godere) hustle a prominent New York producer into believing they've written a hot movie script, they have 10 days to deliver the goods or lose their last opportunity for a big break. Hoping to escape the bustle of New York City to write in peace, the duo head to the upstate country home of Dom's sister Gigi (Marisa Tomei). But their writer's retreat descends into bacchanalian romp when Gigi's hostile boyfriend Wayne (Sam Rockwell) and his younger brother Devon (Brian Geraghty) bring old flames and simmering grudges to a head for the group. As yearnings for love and familial dynamics threaten to derail their career-making opportunity, will Raph and Dom's friendship survive the creative process? (C) The Orchard

Sam Waterston
as Himself

Benny the Boxer
as Himself
View All

News & Interviews for Loitering With Intent

View All Loitering With Intent News

Critic Reviews for Loitering With Intent

It all adds up to not much from director by Adam Rapp, although Tomei is effortlessly captivating (as usual) and Rockwell is always worth watching.

There's too much loitering and not enough intent.

Simply the latest in a string of pointless low-budget exercises in angsty Big Apple self-reflection.

Yes, we have seen much of it before. But for the majority of the film's brief running time (a flicker or so under 80 minutes), I felt myself drawn to what was on screen.

Ms. Tomei, Mr. Rockwell and Mr. Geraghty get stray laughs, but "Loitering With Intent" mostly plays like an excuse for its makers to hang out.

The title may suggest acts of indecency, but if there's anything this mild dramedy could use, it's a little more raciness.

The warmth, energy and intimacy between actors makes the seemingly simple narrative of this film into a memorable experience.

Adam Rapp's comedy Loitering with Intent is about a number of things, but it might have been better served by being about more about fewer things.

The sort of well-meaning, small-scale drama about the creative method that feels too obviously plotted and conventionally scripted to achieve any genuine truths regarding the process.

I enjoyed watching them work, even as I knew it wouldn't amount to much.

For a film about writing a decent screenplay under pressure, Loitering With Intent is successful only in showing just how difficult a task that is.

You won't find much insight into relationships or the creative process in this breezy low-budget comedy.

Audience Reviews for Loitering With Intent

There are no featured audience reviews yet. Click the link below to see what others say about Loitering With Intent!