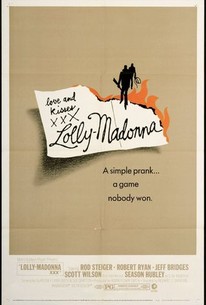 Petty jealousies and misunderstandings between two rival families escalate into a tragic outburst of violence in this drama. Laban Feather (Rod Steiger) is the patriarch of a family of Tennessee moonshiners, brewing corn liquor with the help of his sons: Thrush (Scott Wilson), Zack (Jeff Bridges), Hawk (Ed Lauter), and Finch (Randy Quaid). The chief rivals of the Feather Family have long been the Gutshalls, another Tennessee clan who sell illegal alcohol; the Gutshalls are led by father Pap (Robert Ryan), with the help of his boys Ludie (Kiel Martin), Seb (Gary Busey), and Villum (Paul Koslo). While fighting for their share of the market in white lightning, the Feathers and the Gutshalls have also feuded over a piece of land that each side believes is rightfully theirs. Hoping to create internal friction amongst the Feather siblings, Ludie Gutshall mails a postcard from the non-existent "Lolly-Madonna" to the Feather home and allows the brothers to puzzle over who has attracted her attentions. The prank begins to turn ugly when Thrush and Hawk kidnap Roonie Gill (Season Hubley), a woman passing through town en route to meet her fiancée, believing that she's the "Lolly Madonna" they've heard about. Lolly-Madonna XXX was based on a novel by Sue Grafton entitled The Lolly-Madonna War, and was also released under that title.