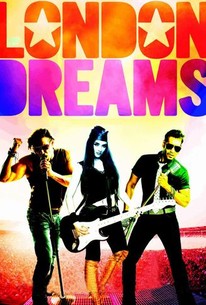 When famous musician Arjun (Ajay Devgan) invites his childhood friend Mannu (Salman Khan) to join his band and tour Europe, jealousy and betrayal threaten to destroy the lives and dreams of both men. Arjun worked hard to make London Dreams a success, and now that his band is topping the charts, he invites his old friend Mannu to jump into the fray. Mannu was performing at weddings just to survive, and in the blink of an eye he's on top of the world. But success comes easy for Mannu, and in time Arjun starts to resent his old friend. When Mannu steals the girl of Arjun's dreams right out from under his nose, the vindictive musician plots to destroy the very man he previously tried to help. Later, during a crucial gig at London's famed Wembley Arena, Arjun finally realizes that he's gone too far, and attempts to salvage the situation while there's still time.

For this film to have soared, it needed to have been a little more untethered, a little more free-spirited. London Dreams is rescued by Asin's occasional flashing smile, and Salman [Khan's] unrestrained act.

London Dreams is a frustratingly dim-witted drama about artistic passion, friendship and insecurity. The script, written by Suresh Nair, has the complexity of a cartoon. Moments of high drama are undermined by sheer silliness.

There's a lot that works in the film's favour. Topping the list are the performances by both Ajay Devgn and Salman Khan who once again share a scintillating chemistry after Hum Dil De Chuke Sanam.

London Dreams aims to be an intense portrait of ambition corrupted by narcissism. Instead, it loses its nerve and settles on trite mediocrity.

Have quite a bit to rant about this nightmare. "May" do it later; if at all I'll ever have ample of time at my disposal. For not, just suffice by knowing that it was deeper (in disappointing) than a mere letdown.