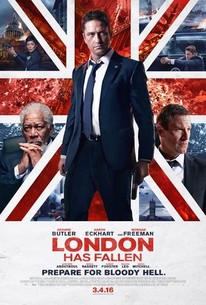 Critics Consensus: London Has Fallen traps a talented cast -- and all who dare to see it -- in a mid-1990s basic-cable nightmare of a film loaded with xenophobia and threadbare action-thriller clichés.

Critics Consensus: London Has Fallen traps a talented cast -- and all who dare to see it -- in a mid-1990s basic-cable nightmare of a film loaded with xenophobia and threadbare action-thriller clichés.

Critic Consensus: London Has Fallen traps a talented cast -- and all who dare to see it -- in a mid-1990s basic-cable nightmare of a film loaded with xenophobia and threadbare action-thriller clichés.

The sequel to the worldwide smash hit "Olympus Has Fallen." The story begins in London, where the British Prime Minister has passed away under mysterious circumstances. His funeral is a must-attend event for leaders of the western world. However, what starts out as the most protected event on Earth turns into a deadly plot to kill the world's most powerful leaders, devastate every known landmark in the British capital, and unleash a terrifying vision of the future. Only three people have any hope of stopping it: the President of the United States (Aaron Eckhart), his formidable Secret Service head (Gerard Butler), and an English MI-6 agent who rightly trusts no one. (C) Focus

Simon Connolly
as Marine One Pilot 1

Scott Sparrow
as Marine One Pilot 2

Boyan Anev
as This Bad Guy

News & Interviews for London Has Fallen

View All London Has Fallen News

Critic Reviews for London Has Fallen

London Has Fallen is another one of those forgettable end-of-winter action films that don't really make much common sense but are really fun to watch when you are distracted with popcorn.

For a bullet-a-minute action/thriller, London Has Fallen is good. Never great.

For what it is this sequel gets the job done.

While Olympus Has Fallen was an enjoyable action thriller with Banning single-handedly overpowering the White House infiltrators, London Has Fallen is much harder to swallow.

[London Has Fallen] is atrocious -- wildly implausible, casually racist, mean-spirited, and strangely defensive about U.S. drone strikes that take out innocent civilians in the Middle East.

What has changed, spectacularly for the better, is the amount and caliber of the humor.

This is big, dumb, jingoistic, stripped-down DTV-style action with a studio budget, fronted by a grim, trash-talking hero with homicidal tendencies that would be psychotic in any other realm. If that's your jam, this movie is for you.

While London Has Fallen does touch each of the bases for an action movie home run, it's definitely more of a solo shot than a grand slam.

Gerard Butler does what he does best - be a gritty, intense, no-nonsense hero.

This may be Gerard Butler's best action film yet.

If the film has, at best, a sub-par screenplay, its storytelling woes are meaningless compared to the abysmal butchery it makes of its action scenes.

Audience Reviews for London Has Fallen

The need for a sequel was unnecessary, especially due the annoyingly stupid and racist stereotypes portrayed throughout. Butlers final statement when faced with the executioner is mindless islamphobia, that American films should stay away from! But if you can overlook all its mindless stereotypes and lack of plot, then the action isn't half bad!

Uncommonly stupid and so improbable -- nay, impossible -- that one cannot even enjoy the film as a fantasy. The dialogue is awkward and immature, as though the script were written by a high school freshman. F-bombs abound, especially when the secret service agents speak with POTUS, demonstrating a severe lack of sophistication in the director and scriptwriter. The characters are painfully unaware of their own surroundings and motivations. (One of many absurd examples is a dramatic death scene where a secret service agent insists the President leave a downed helicopter because it could blow up at any minute...followed 30 seconds later by the agent and President standing languidly next to the same downed helicopter in order to assess their gear and take stock of the situation. Oh, and the dialogue during that dramatic death scene is juvenile beyond words.) The story is poorly plotted and uneven. The plot and script are unintelligent and reflect Trump-like misunderstandings of geopolitical power. For example, there is reference to drone strikes authorized by the G8. The G8 is an economic/political forum. The G8 does not possess an army! Nor has it ever aspired to! Does the director even know what the G8 is?! I'm embarrassed for the director -- this stuff is utterly cringe-worthy! The film is just a mess. It is fun seeing the London landmarks though, so as a travel piece, it earns a star.

"Turn it up to eleven," seems to've been the model phrase here as everything (except for beating up a woman, although one does die) from the first film has just been duplicated. Butler returns as the man behind the president (it's their pun, not mine) as the Indians show up again to threaten the cowboys, only this time in London, and he drinks and swears like the Duke through the role. Let the asswhupping begin! (That one's mine). As rah-rah as any propaganda piece, it's designed to appease those with an unshakeable us-against-them mentality. Yeehaa!