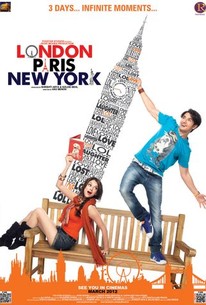 London Paris New York is a film that captures the angst of the twenties, the most dramatic period of one's life - when you have to find a career, you have your first significant relationship and most importantly form your identity in this world. This is the story about Lalitha, a middle class south Indian girl from Chembur (an eastern suburb in Mumbai) who is on her way to New York to study politics with full scholarship, and Nikhil, a Punjabi rich kid from Bandra (a posh western suburb of Mumbai) who is going to study Filmmaking in London on 100% dad's money. They decide to hangout together one evening in London and find that they are completely drawn to each other even as their future lies on separate continents. The film follows their personal journey and their love story as they meet in London, Paris and New York for a night each over eight years. The film is in three chapters and each chapter is shot in a manner that mirrors the mental state of Nikhil and Lalitha. -- (C) Official Site

Dalip Tahil
as as Lalitha's Father

A desi rom com with flavour and zing.

Too often, [director Anu] Menon resorts to formulaic character traits, so if Nikhil is a pretentious film school student, he must have a goatee and refer to Andrei Tarkovsky.

Menon puts such total faith in her stars' ability to draw us into their emotional ups and downs that the simplistic nature of the touristy setup -- and the conventions of their romance -- escapes her.

Ends up being just as formulaic as a run-of-the-mill Bollywood romance and less emotionally engaging.

It probably won't move you to tears, but one thing is for sure -- after traveling across the globe, this one won't leave you jet-lagged.

Avijit Ghosh
The Times of India

London Paris New York is a charming, quirky tale of love that strikes out of the blue.

Menon's more contrived plotting elements break any magic woven by the engaging dialogue or the sweet rapport between her likable leads.

A couple finds love and heartache in a sweet romantic comedy that takes place in three glamorous cities. Indian production is engaging if thoroughly conventional.

There are no featured reviews for London, Paris, New York at this time.