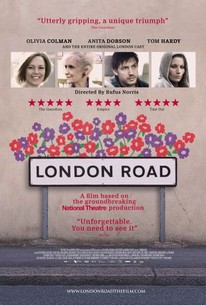 LONDON ROAD documents true events that occurred in 2006, when the town of Ipswich was shattered by the discovery of the bodies of five women. The residents of London Road had struggled for years with frequent soliciting and curb-crawling on their street. When a local resident was charged, and then convicted, of the murders, the community grappled with what it meant to be at the epicenter of this tragedy. Using their own words set to an innovative musical score, LONDON ROAD tells a moving story of ordinary people coming together during the darkest of experiences. The stage production 'London Road' was an immediate hit and earned five-star reviews when it premiered at the National Theatre in 2011. It returned to the stage in 2012 for a sold-out run.

Andrew Frame
as Policeman with Harry

Once Rufus Norris's film gets going, it quickly reveals itself as a vibrant, almost revolutionary work.

What starts out like a documentary soon morphs into something quite odd but strangely compelling, a social commentary of sorts about everyday people confronting a shocking and monstrous reality close to home.

All in all, a brilliant piece of work.

The film is adapted from a stage play, and it shows in every frame.

London Road is a commanding, at times hypnotic experience.

Truth be told, London Road, is a musical unlike any other and lead Olivia Coleman is a first-rate artistic chameleon worthy of being noticed...

The fact that this story will live on through being communicated in such a unique way is amazing, and the filmmakers have told this story with ingenious creativity. A thought-provoking, challenging and wondrous film.

[I]t is because of its depressing background that makes this stand out as a musical.

As far as innovation goes, London Road is streets ahead - however its intrinsic qualities of "spoken word" song and laudable accuracy may not have such impact on repeat viewings.

The idea of London Road is much more interesting than anything on the screen, be it visually or audibly.

For anyone in the mood for something that bucks against the norm, London Road will stun and delightfully perplex from the opening frames.

London Road is a wonderful representation of all that is exceptional about the British film industry.

Innovative musical based on interviews and testimony during and after a serious of brutal murders in Ipswich; it shouldn't work and sometimes it's too bizarre for its own good, but it's very interesting and brilliantly acted.