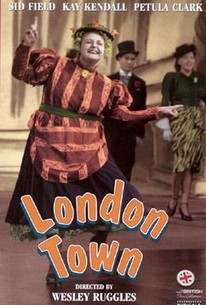 London Town was painstakingly planned as a huge box-office smash--even unto hiring several Hollywood leading lights to work on the film, including producer/director/writer Wesley Ruggles, Technicolor cinematographer Ernest Hiller, costume designer Orry-Kelly and songsmiths Jimmy Van Heusen and Johnny Burke. Veteran music-hall entertainer Sid Field plays a washed-up comedian who hopes to stage a comeback in a glittering new revue. Alas, Field is hired as merely an understudy and bit player. His faithful daughter Petula Clark (yes, Petula Clark) pulls a few fast ones in order to get her dad back on stage in a starring role. Making her film debut in a supporting part is Kay Kendall, who'd have to wait a decade or so for full stardom. Far from a hit, London Town was one of the most notorious flops in the history of the British cinema.

Around the laborious narration of this story is built the most costly British musical to date. Presumably if it had cost less it could have been cut by a further half-hour.

There are no featured reviews for London Town at this time.