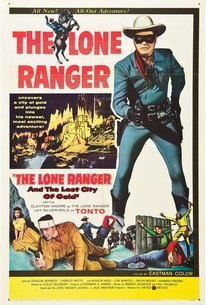 This second theatrical-feature spin-off of TV's Lone Ranger series stars, as ever, Clayton Moore as the Masked Rider of the Plains and Jay Silverheels as his faithful Indian companion Tonto. This time around, the plot concerns five silver medallions. When placed together, these tiny hunks of silver reveal the location of the titular Lost City of Gold. The owners of three of the medallions have already been killed by the mystery villain; it's up to the Lone Ranger and Tonto to save the other two owners -- Douglas Kennedy and little Noreen Nash -- from harm. Unfortunately, the bloom was (temporarily) off the rose for the Lone Ranger franchise, and Lone Ranger and the Lost City of Gold ended up in the red.

Clayton Moore
as The Lone Ranger

Belle Mitchell
as Caulama
View All

Clayton Moore and Jay Silverheels reprise their TV roles as the Lone Ranger and Tonto.

suffers from ... lack of imagination and limited scope

In this one, they tried to play to comic book/scifi fans by having the story involve a meteorite which struck a Spanish camp and saved an Indian village long ago. However, they did a good job in maintaining western style action while only tipping their hat to scifi.

The Lone Ranger and the Lost City of Gold Quotes