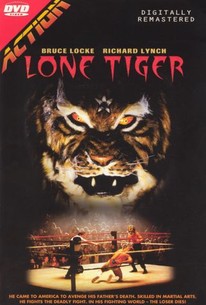 While searching Las Vegas for the man who killed his famous father -- a wrestler known for his trademark tiger mask -- Chuji Kurenai (Bruce Locke) is drawn into an underground world where brutal fighters battle to the death. Promoter Bruce Rossner (Richard Lynch) keeps raising the stakes, finally forcing Chuji to fight three men at once. Barbara Niven, Stoney Jackson and Timothy Bottoms co-star in this martial arts-flavored actioner.

There are no critic reviews yet for Lone Tiger. Keep checking Rotten Tomatoes for updates!

There are no featured reviews for Lone Tiger at this time.