The Loneliness of the Long Distance Runner1962

The Loneliness of the Long Distance Runner (1962) 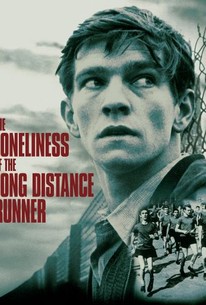 Critics Consensus: Dry and full of angst, this British New Wave classic features potent social commentary and a star making performance by Tom Courtenay as a textbook example of the "angry young man."

Critics Consensus: Dry and full of angst, this British New Wave classic features potent social commentary and a star making performance by Tom Courtenay as a textbook example of the "angry young man."

Critic Consensus: Dry and full of angst, this British New Wave classic features potent social commentary and a star making performance by Tom Courtenay as a textbook example of the "angry young man."

The Loneliness of the Long Distance Runner Photos

Tom Courtenay made his film debut as Colin Smith, a lower-class British youth who is sent to a reformatory as a result of a robbery, in Tony Richardson's landmark Angry Young Man film. Mixed with Colin's reform-school experiences, spent training for a long-distance marathon against a rival institution, are his memories of the events that led up to his incarceration, including the death of his father (Peter Madden).

James Fox
as Public School Boy in Race
View All

Critic Reviews for The Loneliness of the Long Distance Runner

The performance of Tom Courtenay and the imaginative, if sometimes overfussy, direction of Tony Richardson, plus some standout lensing by Walter Lassally makes this a worthwhile pic.

Most of the period hallmarks of the British New Wave are paraded here.

While this show of compassion may not sit comfortably with those who distrust social agitation and too easy sympathy, it must be said that a splendid presentation is made by Mr. Richardson.

It's provocative and enjoyable, but not a classic.

The film, with its grim Nottingham setting and working class milieu, must have seemed fresh in its day. Now, though, it looks and sounds like a relic from a bygone era.

With so many styles incorporated, it's no wonder that the film has no style, nor does it have anything that might pass for aesthetic structure. The bits and pieces are choppily assembled, with clumsily overlapped dialogue serving as makeshift bridges.

The film's numerous flashbacks make heavy weather of the essentially simple story, but they fail to spoil its honesty and sardonic humor. Sir Michael Redgrave portrays, without any taint of caricature, a hearty reform school governor...

Not bad: it has realism, pathos, an interesting performance by a new young actor (Tom Courtenay, who is no Albert Finney but will do) and a cinematic liveliness rare in British films about working-class life.

Richardson, the producer and director, makes his point clearly enough, but at quite a price: bias trailing off into parody, forcefulness impaired by stylistic inconsistency, a dispiriting familiarity of approach.

Ultimately, Richardson's pot-shots at consumerism and class have lost some urgency, but the nihilistic, punky buzz packs an immortal wallop. Classic.

In attempting to straddle dramatic realism, Richardson tried hard to avoid moralizing on the hypocrisies of adults or exaggerating the experiences of youth, but in striving for the middle ground, he also strive for mediocrity.

Audience Reviews for The Loneliness of the Long Distance Runner

Another exquisite film from 1962, the year that brought you Lawrence of Arabia, To Kill a Mockingbird and King Kong vs. Godzilla. Tony Richardson knows how to make a motion picture and this is unequivocally one of his best.

While The Loneliness of the Long Distance Runner is a beautifully bleak story about a reform school kid and for good or ill, the choices he makes. Great direction and cinematography along with a great debut performance by Tom Courtenay are definitely the highlights of this movie, but what I really liked was the flashback-told story and buildup to a truly well-done finale. Out of all the "angry young man" movies I've seen, The Loneliness of the Long Distance Runner was the best because it actually explained WHY its protagonist was the way he was as opposed to making you endure the behavior of a raving dipshit.

Ahh Mother,why oh why oh why oh why, don't they make them like they used to? Forget your Guy Richie crime capers,'Loneliness of the long distance runner' is British cinema at its best. I can't explain why I love this film (erm so why I am I here?), whenever I try to explain the plot to friends they look perplexed as to why the film should be so good. Tom Courtenay is in his element in his portrayal as the 'loveable rogue'. Has 'Jerusalem' ever been more poignantly sung as it has here? Im not urging you to go out and purchase the film, but if you have a spare 90 odd minutes and it comes on television then watch it. Ta.

Colin Smith is a rebel with a cause, the furious voice and spirit of the proletariat, the people who have to suffer for the privileged and get nothing in exchange but a terrible burden. A battle against an opressive system, depicted in a fiery and emotive way. Magnificent characters and story, and phenomenal Tom Courtenay. One of the crown jewels of British cinema.

The Loneliness of the Long Distance Runner Quotes