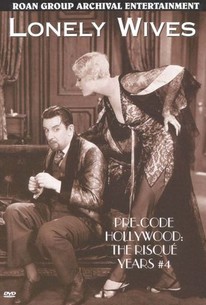 Five characters find themselves playing a lively game of musical beds in this saucy pre-Code comedy. Richard (Edward Everett Horton) is a well-known lawyer who has a rather surprising reputation as a ladykiller. Felix (also played by Horton) is a nightclub impressionist who wants Richard's permission to spoof him in his stage act. Richard tells Felix he'll grant his approval only if he can convince Mrs. Mantel (Maude Eburne) that's he's actually Richard. As Felix sets out to pull the wool over Mrs. Mantel's eyes, Richard is advising Diane (Laura La Plante), one of his clients with whom he's infatuated, that she should file divorce papers against her husband, unaware that said spouse is actually Felix. Meanwhile, while Felix is trying to fool Mrs. Mantel, Richard's wife, Madeline (Esther Ralston), shows up, and she has no trouble at all believing that Felix is her husband -- so much so that Felix ends up in bed with Madeline. Lonely Wives also stars Patsy Ruth Miller and Georgette Rhodes.

There are no featured audience reviews yet. Click the link below to see what others say about Lonely Wives!