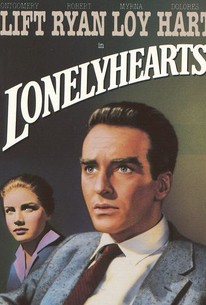 For his film directorial debut, producer Dore Schary selected a longtime pet property: Miss Lonelyhearts, Nathaniel West's trenchant 1933 novel. Montgomery Clift delivers a haunting performance as journalist Adam White, assigned by his cynical editor Adam Shrike (Robert Ryan) to take over a newspaper advice column. Signing himself Miss Lonelyhearts, White is appalled by the human misery pouring out of the letters sent to him (one of his correspndents was born without a nose), but Shrike insists that anyone who'd write to such a column is fake. To find out for himself, White looks up one of the correspondents, unhappily married Fay Doyle (Oscar-nominated Maureen Stapleton). His pity for the seriously disturbed Fay nearly leads to tragedy (in the novel, there's no "nearly"). Meanwhile, Shrike tries to contend with his own tottering marriage to his wife Florence (Myrna Loy). In additional to shortening the title to Lonelyhearts, Dore Schary made a number of radical changes in the original, adding an overabundance of "meaningful" dialogue and softening the character of Florence Shrike. Purists were enraged by Schary's liberties, while critics carped at his perfunctory direction; audiences, however, seemed to like the film.

[Lonelyhearts] presents a glittering cast in a somber though sincere tale for the thinking man and woman.

It's gripping if a little repetitive.

Consistently fine performances by an exceptionally well-balanced cast give further cause for regarding this endeavor with appreciation and respect.

Lonelyhearts turns a revered novel of pessimism into a semi-optimistic newspaper story, confused in casting. rigid in story-telling, but mildly gripping because of its TV-style intimacy and drive.

Here (West's) powerful novella about the lovelorn is brilliantly enacted, tautly directed, and scripted as faithfully as producer Schary's compassion for the public would allow.

Great cast but a sad film, worth viewing though.

You can tell Lonelyhearts was based off a play because the whole time you feel like you're watching a bootleg of a play with better camerawork. Speaking of which, I really liked the way this movie was photographed. Montgomery Clift was way too sensitive, Robert Ryan was too much of an asshole (and I love a good movie asshole) and watching the grossly underused Myrna Loy was almost painful as she portrayed a tired, beaten-down by life character. It's very easy to see why Lonelyhearts is overlooked but that's not to say you shouldn't check it out if you get the chance. I recommend drinking hard liquor while viewing...