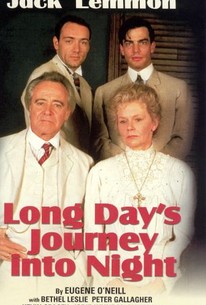 Previously filmed by director Sidney Lumet in 1962, Eugene O'Neill's gloomy Pulitzer Prize-winning play Long Day's Journey Into Night is given a vibrant videotaped treatment by Jonathan Miller. Set on one hot August day and night in 1912, the story concerns the tragic Tyrone family (based, as any American literature student will tell, on O'Neill's own star-crossed clan). The four principals include James Tyrone (Jack Lemmon), a once-great actor who compromised his talent by barnstorming all over the country in a tired melodrama and by consuming great quantities of alcohol; James' wife Mary (Bethel Leslie), a morphine addict who lives in a world of dreams and delusions; oldest son Jamie (Kevin Spacey), a drunken hellraiser; and sensitive,tuberculosis-ridden younger son Edmund (Peter Gallagher), the Eugene O'Neill counterpart. As originally staged, Long Day's Journey Into Night was a long journey indeed, running close to four hours. Director Miller wisely prunes the text down to the essentials, and with equal wisdom packs plenty of visual dynamics into an otherwise excessively verbose piece. Long Day's Journey Into Night was first telecast April 11, 1987, over the Showtime Cable Service.

There are no critic reviews yet for Long Day's Journey into Night. Keep checking Rotten Tomatoes for updates!