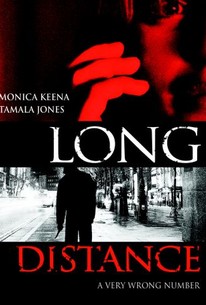 Monica Keena (Abby Morgan on television's Dawson's Creek) headlines the direct-to-video psychological thriller Long Distance. She plays Nicole Freeman, an average young woman who walks into a waking nightmare when she accidentally dials a wrong number one evening, "interrupting" a murder-in-progress. The psychopathic perpetrator spots Monica's name and number on the caller I.D., and repeatedly phones her back. He then stages a trail of homicides across the country that lead to Monica's Boston house, and implicates her in each murder. Ivan Martin, Kevin Chapman and Tamala Jones co-star; Marcus Stern directs, from a script by Michael Rasmussen, Shawn Rasmussen and Glenn Cooper.

There are no critic reviews yet for Long Distance. Keep checking Rotten Tomatoes for updates!

There are no featured audience reviews yet. Click the link below to see what others say about Long Distance!